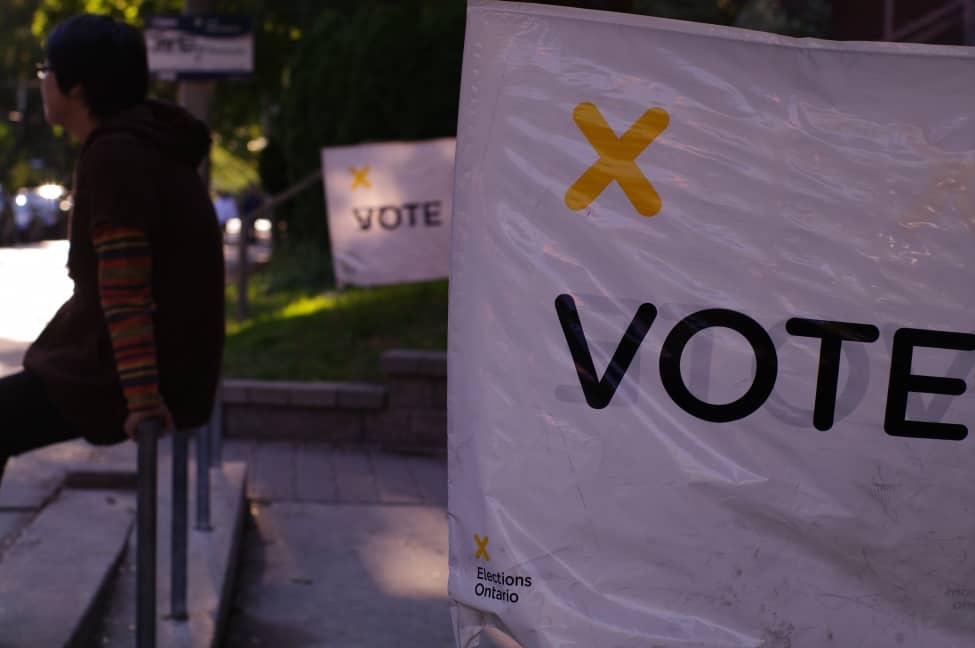 Would you walk past this Ontario election sign? knehcsg/Flickr

Are our municipal ballot boxes half-full or half-empty?

Tell us why you do or don’t vote

Canada’s municipal ballot boxes are half-full or, depending on your outlook on life, half-empty. According to a University of Waterloo study of municipal voting trends released in 2014, fewer than 50 per cent of Canadians cast a ballot for their mayors and councillors. And according to a summer survey by Nanos Research, one in three Ontarians didn’t even know there was a municipal election coming this fall.

Well, it is voting time for the cities and towns in six provinces and territories across the country. From Oct. 18 to 24, the Yukon, parts of the Northwest Territories, British Columbia, Ontario, Manitoba and parts of Saskatchewan will hold municipal elections; Prince Edward Island will follow a few weeks later.

But a common refrain I hear from friends and family is that it’s hard to find basic information on municipal elections, especially who is running and what each candidate stands for.

So, if you are from one of these provinces or territories, we want to know two things:

Why do we ask? The reasons to vote are endless and have often been cited in vote-shaming articles after surprise victories from populist movements. But there are also a lot of barriers to participating in our democracy and until we start talking about these barriers, our ballot boxes are likely to stay half-empty.

You can email me here.

Updates from our Scarborough team.

Our new Scarborough reporter, Aparita Bhandari, is ready to listen to community members wherever they are — from the interwebs to the library to bus stops. Like this conversation she had with long-time Scarborough resident Brenda Thompson who described her frustrations with local transit: “I think it’s an assault on our dignity. I think we have a right to certainly get where we need to go quickly by public transit, and we have a right to have a comfortable ride.”

Scarborough usually gets a bad rap in traditional media, whose stories dwell on crime and grime in a community once nicknamed “Scarberia” and “Scarlem.” Through her reporting, Aparita wants to provide a space for residents to reclaim Scarborough. Help her fill in gaps in coverage by joining our dedicated Scarborough Facebook group and signing up for Aparita’s weekly newsletter.

Updates from our Urban Nation team.

We asked you to vote on what we should investigate first in the urban Indigenous community in the Lower Mainland. The votes are in and our team will be exploring stories around urban Indigenous culture: the ways in which community members connect to and sustain their culture, and the barriers they face.

Reporters Wawmeesh Hamilton and Brielle Morgan break down the results here and how we put the vote together here.

If you want to take part in future votes on what we cover next, we invite you to become a member of The Discourse. As a member, you’ll get to go behind the scenes of our editorial process and make an impact by contributing to our investigations. Sign up here.