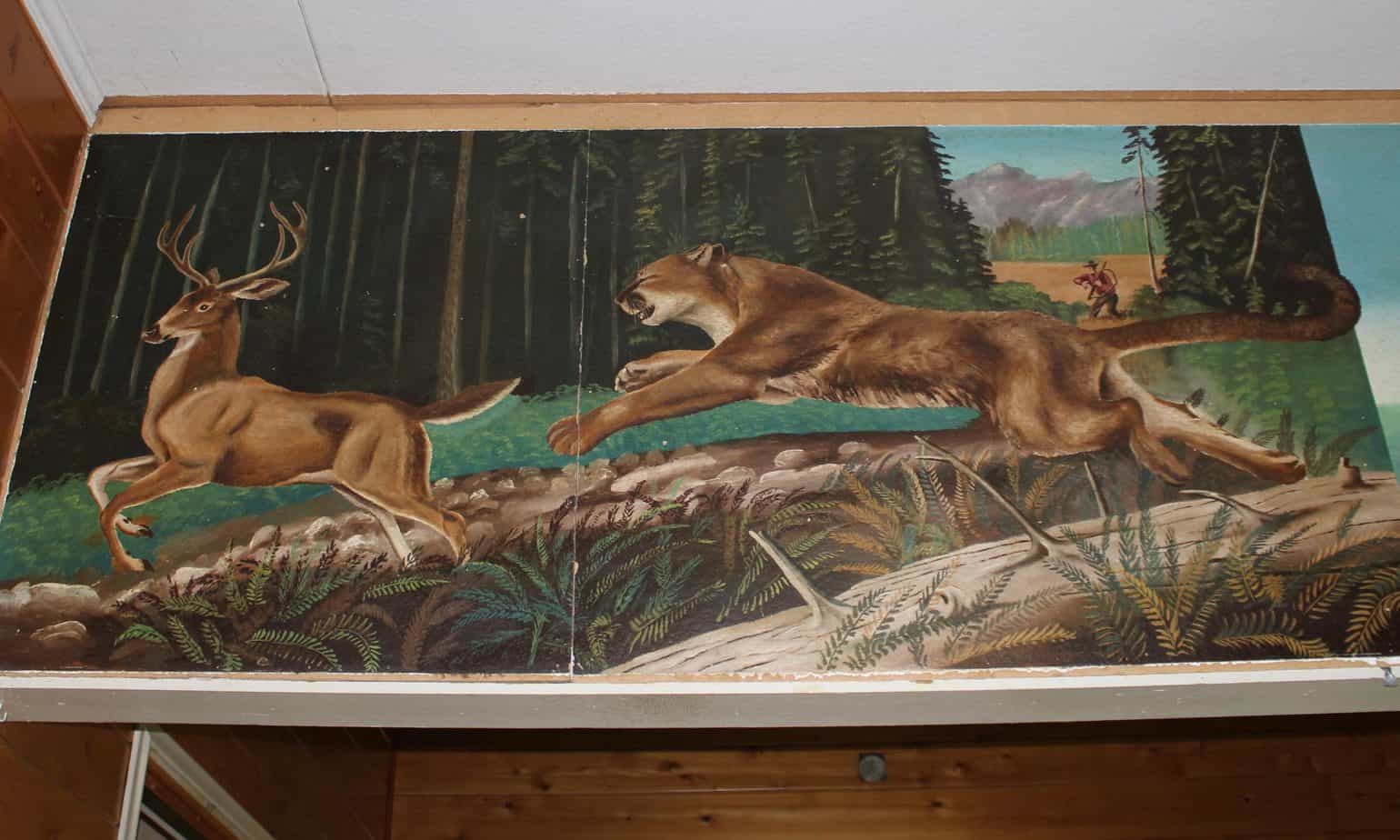 Painted onto a beam in the Honeymoon Bay Hall, this painting of a cougar was the catalyst for this Curious in Cowichan question. Jacqueline Ronson/The Discourse Cowichan
Cowichan Valley

A century ago, two Cowichan Lake youngsters earned fame by fending off a cougar attack.
Mat Pereira
Support this work. Tell a friend.

This story is from the Curious in Cowichan newsletter. Sign up to get stories like this in your inbox, every Friday.

I’m Mat Pereira, a journalism student at BCIT and The Discourse Cowichan’s remote intern. I’ll be answering some of your questions in the coming weeks. I’m from Vancouver, so it’s been fun for me to explore the Cowichan Valley through your curiosity. So keep those great questions coming!

Bruce, originally from Honeymoon Bay, wrote to us to tell us about his favourite local history story, which he says is depicted in a mural in Honeymoon Bay Hall. The memorable painting illustrates a cougar pouncing towards a deer, while a man with a gun stands in the background. Bruce tells me that the mural shows a hunter going after a cat that attacked two kids, a true story that earned the children fame in their British homeland during World War I.

The premise of this tale intrigued me and I wanted to know: What’s the story behind the mural? So I reached out to Lynne Bowen, author of Those Lake People: Stories of Cowichan Lake, to find out more. Here’s what I learned.

What’s the story behind the Honeymoon Bay murals?

Honeymoon Bay Hall houses some magnificent murals painted by artist George Jenkins. Between 1952 and 1953 he painted the hall’s dining room beams with images of wild animals, landscapes and settler life — snapshots of the community’s identity.

In regards to the cougar mural, I didn’t find any concrete evidence that it was inspired by a particular story. But cougars loom large in the imagination of the lake people, historically and today. There are many great tales that could be transposed onto the walls of Honeymoon Bay Hall.

How two British kids fended off a cougar

And there is a famous tale of two pioneer children fending off a cougar in the Cowichan Lake area. Here’s what happened, according to what Lynne Bowen told me.

She describes two children: 11-year-old Doreen Ashburnham and 8-year-old Tony Farrar. They were cousins belonging to a family that was, according to Bowen, “more pretentious than money.”

The families emigrated from the UK and settled in the Cowichan Lake area prior to World War I. Bowen explains that Mr. Ashburnham set out to build a hunting lodge.

In 1916, Doreen and Tony were out walking near their home, looking for their ponies, when they were ambushed by a cougar.

“Tony got jumped by the cougar, and Doreen fought it off with her bridal, … her arm [getting] stuck in the cougar’s mouth,” Bowen tells me.

The children worked together to fight off the attack, defending each other from the cat until it gave up and turned away.

The kids were lucky to survive the ordeal, with historical records indicating that both suffered severe wounds. In an interview 70 years later, Doreen Ashburnham recalled that Tony’s scalp was barely hanging on.

Local hunters later tracked and killed the wild cat, which they found to be blind and old.

As the two children recovered, word eventually made its way back to Britain. Their heroic tale permeated through social circles.

King George V would go on to award them the Albert Medal Second Class, a recognition of heroism in an extremely dangerous situation.

As time went on, Doreen and Tony grew older and both left the Cowichan area.

Tony died accidentally at the age of 21 at a Manitoba shooting range. Doreen went on to live a full life, and died at the age of 86 in California. Both the children’s Albert medals now live at the Canadian War Museum in Ottawa.

I asked Bowen if the story might have inspired the mural in Honeymoon Bay Hall.

She replied, “Cougars were a factor in life at the lake and they probably downed deer, but I don’t see a relationship between the cougar in the mural and the cougar who attacked Doreen and Tony. There was a government bounty on cougars by the late 1920s and there were men who made a living hunting the cougars for the bounty.”

So, though the mural is most likely not drawn from Doreen and Tony’s survival story, it is in the end art and open to interpretation. The facts still exist. Cougars have always played an important role in regional ecosystems and stories.

Please let me know if I missed anything or if you have any other information you think I should know. And keep submitting your local history questions right here!