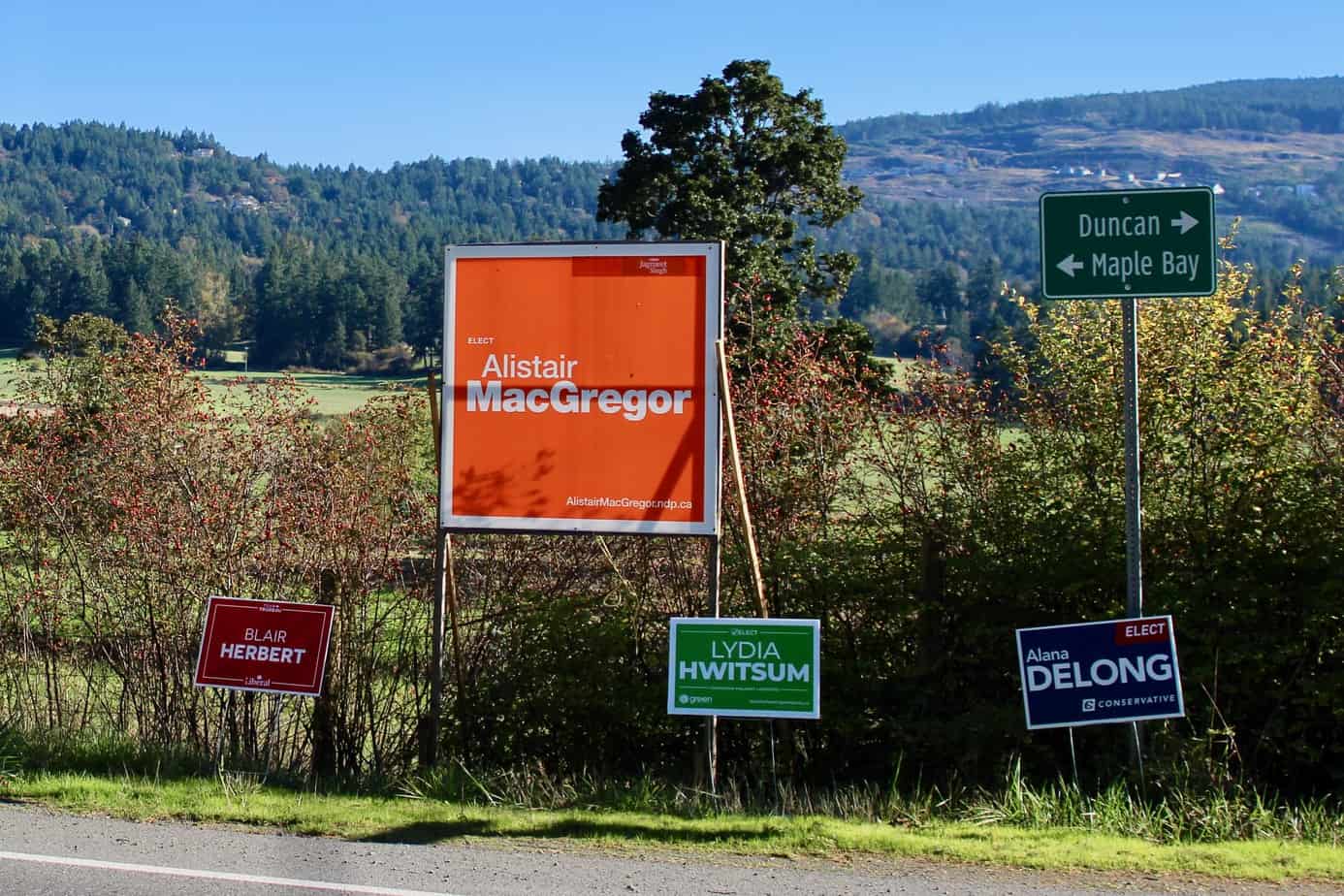 The next MP could have the lowest winning percentage in modern Canadian history.
David Minkow
Support this work. Tell a friend.

One-in-four votes may be all that it takes to claim victory in the riding of Cowichan-Malahat-Langford. That’s because the Greens, Conservatives and Liberals all appear to have a shot at winning this traditional NDP stronghold. It’s the only race in Canada where the latest polls consistently project four candidates to receive more than 20 percent of the vote. With less than two weeks until election day, Cowichan-Malahat-Langford is a four-way race.

On Oct. 6, the 338Canada polling website, which aggregates publicly available polling data, had Conservative candidate Alana DeLong leading the riding with a scant 26.5 percent of the vote. If that scenario played out, this year’s winner in Cowichan-Malahat-Langford will have the lowest winning percentage in modern Canadian history. (The prediction has since shifted in the NDP’s favour.)

Cowichan’s four-way race is so tight that In the first week of October alone, Green candidate Lydia Hwitsum, NDP incumbent Alastair MacGregor, and DeLong have all led the polling at various points, with Liberal candidate Blair Herbert not far behind. The projections have been so volatile that on 338Canada, for example, Hwitsum recently went from first place to fourth place in the span of a week.

[See The Discourse Cowichan’s Q&A with pollster Angus McAllister for more on how much you should put faith in the polls.]

CBC pollster Eric Grenier says he also sees Cowichan-Malahat-Langford as a tight four-way race. “The NDP can’t afford to lose any formerly safe seats, particularly on Vancouver Island,” he wrote to The Discourse Cowichan in an email. “For the Greens, it is their best region of the country to make gains and potentially hold the balance of power in a minority government, while for the Conservatives and Liberals any seat they can win thanks to vote splits among other parties is a bonus in what is looking like a close race.”

Wait, isn’t this supposed to be an NDP riding?

The Cowichan region has long been a federal NDP stronghold. Except when it hasn’t.

The NDP has won five consecutive contests, starting in 2004 with former MP Jean Crowder’s first of four victories. Yet this was preceded by three NDP defeats in a row, all by wide margins, to the Alliance Party in 2000, and the Reform Party in 1997 and 1993.

“It’s a dramatically interesting riding and always has been,” says Mike Coleman, the longest-serving mayor of Duncan (1980-1982, 1987-2005) who has long been active in the local Liberal Party. He explains that while the demographics have historically favoured the NDP, with a base of mill workers and generally good relations with Cowichan Tribes, local voters also tend to be independent-minded. “The central Cowichan part of the riding has historically been not positively in favour of whichever government it was. … There is something against the government, or against the East.”

Changing demographics are making the riding even more interesting and complex, says Rob MacLean. He’s a retired history teacher at Brentwood College and self-professed veteran election watcher in the Cowichan Valley. (Note: after decades of keeping a non-partisan persona, he has canvassed a couple of times this fall for the NDP.) “With the Cowichan Valley being a growing retirement community, that tends to attract small ‘c’ [conservative] and large ‘C’ voters. To complicate things even further, there is a cultural vibrancy that leads people to environmental concerns and the rise of the Greens.”

But perhaps the biggest reason why the NDP may be losing ground in the riding, according to MacLean and others, has to do with the fact that it’s not the same riding.

It’s a strange sight to see signs for Cowichan-based candidates south of the Malahat. This is the result of the 2012 federal electoral distribution that birthed Cowichan-Malahat-Langford out of the former ridings of Nanaimo-Cowichan and Esquimalt-Juan de Fuca. About one-third of the riding’s eligible voters live in the Langford area — which is among the island’s most rapidly growing regions.

Richard Hughes, who runs the Cowichan Conversations blog, considers himself an independent these days, after decades of association with the NDP. He says that the Conservative Party, which led the redistribution, cut off the strength of NDP when they replaced Ladysmith and south Nanaimo with “this strange sort of carved-out area of Langford.”

“It’s a bizarre riding,” posits Hughes. “For people in Langford, coming to Duncan is like crossing the Rocky Mountains. …So, there’s not much understanding of our situation here in the Valley by people in that part of the riding.”

If the current boundaries had been in effect in 2011, a redistribution of votes cast that year would have resulted in a narrow NDP victory of 253 votes over the Conservatives, instead of the 6,775-vote margin won that year by NDP’s Crowder in the Nanaimo-Cowichan riding, according to the Election Prediction Project.

But why does this race appear much closer than four years ago?

Projections for a true four-way contest are being driven by a confluence of factors.

“First Nations turnout will be a big factor in B.C.,” says McAllister. Turnout on reserves nationally soared from 47.4 percent in 2011 to 61.5 percent in 2015, closing the gap with the overall turnout rate of 68.3 percent (which itself was the highest overall turnout since 1993). The Cowichan-Malahat-Langford riding has the highest percentage of Indigenous voters on Vancouver Island, and a First Nations candidate is running for The Green Party. Lydia Hwitsum is a former chief and current member of Cowichan Tribes.

Another factor, MacLean believes, is that unlike the concerted effort in the last federal election in 2015 to defeat Stephen Harper, “there is some dissatisfaction with all four national leaders and all four national parties.” As a result, he predicts: “This time around, local candidates will count more than ever before.”

A few other races in Canada are also looking like four-way contests, according to the latest polling. All of them are on Vancouver Island. That’s primarily due to growing support for Green Party candidates. They hope to follow in the footsteps of party leader Elizabeth May and Nanaimo-Ladysmith MP Paul Manly. May recently said that “people shouldn’t worry about strategic voting.” In 2015, the Greens finished a distant fourth in Cowichan-Malahat-Langford.

The long-time election watchers interviewed for this story caution against putting too much faith in the accuracy of public polling. Less than two weeks out, none of them say they have a good sense of what will happen on Election Day. Nobody knows what role strategic voting could play.

Mike Coleman, who has been involved locally in politics for 50 years and currently is a volunteer for the Liberal Party, says he could see the election going any of four ways. “That’s pretty rare. I wouldn’t be surprised to see someone win with less than 30 percent of the vote.”

Correction: A previous version of this article said that this is the first time a First Nations candidate has entered the race in this riding. In fact, Fran Hunt-Jinnouchi, a member of the Quatsino First Nation, ran as the Green Party candidate in 2015. (October 13, 2019)