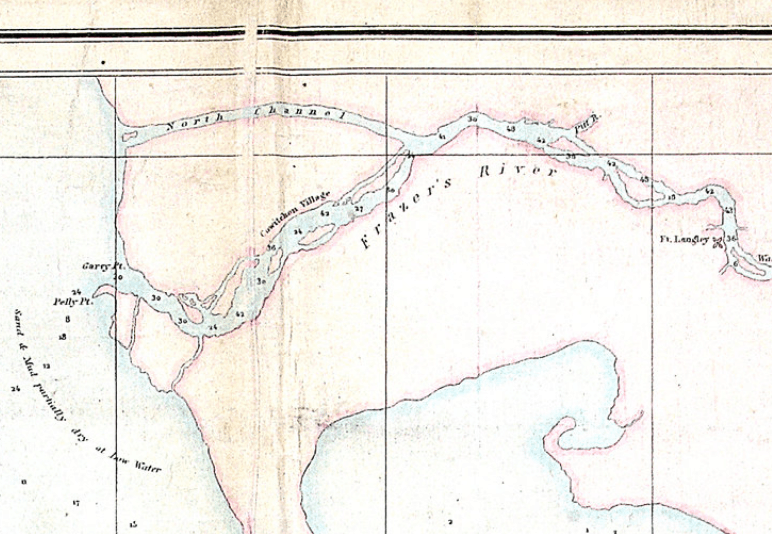 This 1854 map shows a "Cowitchen Village" on the lower Fraser River in what is now Richmond, B.C. (Source: The National Archives/University of Victoria)
Cowichan Valley

The fight to reclaim a historic fishing village in Richmond is in Duncan court this week to allow local elders to be heard.
Jacqueline Ronson
Support this work. Tell a friend.

Together, these nations form the Cowichan Nation Alliance, and they are suing to reclaim 780 acres of land owned by the Government of Canada, the Vancouver Fraser Port Authority and the City of Richmond. (Lyackson First Nation is a member of the alliance but not a plaintiff in the case.) The lawsuit also seeks fishing rights for alliance members in the lower Fraser River.

Old maps mark a Cowichan village on the banks of the lower Fraser River, with longhouses lining the banks. The Cowichan Nation Alliance says the village at Tl’uqtinus had more than 100 permanent structures, and it was occupied seasonally. A flotilla of canoes would make the journey across the Georgia Straight when conditions were right, to fish and trade.

“We’re fighting to get our land back,” said Cowichan Tribes Chief William Seymour, reached by phone early Monday morning. He said the alliance has tried to negotiate for these lands, both directly and through the treaty process, unsuccessfully. It was left with no choice but to start legal action, the chief said.

The alliance filed the lawsuit in 2014, and the trial opened in B.C. Supreme Court in September, 2019. The judge said on Monday that she anticipates a total of 400 days of hearings, which will take about three years. Normally the proceedings take place in Victoria, but this week and next week they will be in Duncan, to allow for local witnesses who may have difficulty travelling. Chief Seymour said he invites everyone in the community to come witness the proceedings, to learn some local history. Most days, the trial will be in session from 10 a.m. to 12:30 p.m. and from 2 p.m. to 4 p.m.

On Monday morning, a lawyer for the plaintiff First Nations read an affidavit sworn in 2007 by the late Cowichan Tribes elder and former chief Ernest Wesley Modeste. It spoke of his life and his family — the way they lived and their ancestors lived. It spoke of their use of lands and waters including the Cowichan Valley, southern Gulf Islands and the lower Fraser River for fishing, harvesting and trading. The document is a window into a previous world. Attached to the affidavit is a petition by the “Cowichan Tribe of Indians” to the King of England, signed in 1909, asking for the return of land rights. As the lawyer read Modeste’s testimony into the record, the former chief’s widow, Diane Modeste, sat in the front row and listened.

Next began the sworn testimony of Pahalicktun (Richard Wayne Thomas,) chief of Lyackson First Nation. His testimony centered on the impacts of residential schools on him and on his community. He spoke to how the schools interrupted the transfer of language, culture and knowledge. “I have very limited knowledge” to pass on to the next generation, he said. He spoke of the difficulties maintaining culture and traditions for a First Nation whose members are spread over Vancouver Island, the Lower Mainland and beyond, and whose reserve land on Valdes Island holds no services, little infrastructure and few opportunities for economic development.

In the morning, a lawyer for the Musqueam Indian Band cross-examined Pahalicktun, also known as Chief Richard Thomas of the Lyackson First Nation. Musqueam is a defendant in the case. The questions worked to establish that Coast Salish Nations have, in the past and more recently, commonly asked for permission to fish or otherwise harvest resources in each others’ territories. The lawyer presented documents showing that Coast Salish First Nations agreed in the 1990s to manage fisheries internally, without interference from the federal government. The line of questioning hints at some of the objections the Musqueam Indian Band may hold in this case, which seeks to have Fraser River fishing rights granted to the plaintiff First Nations.

In the afternoon, Suliptun, also known as Norbert Sylvester, an Elder with Cowichan Tribes, took the stand. A lawyer for the plaintiffs examined him. The questions established his life history and that of his extended family, going back several generations. He injected laughter into the courtroom with his humour and charm. At one point, the lawyer asked if he sometimes ran away, as a child, from Kuper Island Residential School to visit his grandmother on the other side of the Island. “Don’t tell them!” he answered, as if he still feared that the nuns and priests would discover his transgressions. The testimony covered his many family relationships, the things he learned through this life and how residential school and the Indian Act band system disrupted his family, education and culture.

The Cowichan Nation Alliance trial to reclaim rights to the historic Tl’uqtinus village in Richmond continued in Duncan court today.

Cowichan Tribes Elder Suliptun, also known as Norbert Sylvester, was on the stand. A lawyer for the plaintiffs spent much of the day asking him questions to establish his knowledge, experience and relationships as they relate to canoe building, paddling and fishing.

In the afternoon, they got to the heart of it. The lawyer asked if he’d ever heard elders talk about the need to ask for permission from another First Nation to go fish in the Fraser River.

“I never heard of it, not in my days,” Suliptun replied.

He said he’d never heard for the need to establish permission from the Musqueam Indian Band to fish there until the 1990s. And at that time, he and another man went to fish in the lower Fraser River in protest. They were quickly stopped by an official with the Department of Fisheries and Oceans, he said, who told them it was illegal for them to fish there.

“I didn’t think I needed permission,” Suliptun said. “We always had Tl’uqtinus as our land on the Fraser River.”

The Musqueam Indian Band is one of the defendants in this case. Lawyers for Musqueam will have the opportunity to cross examine Suliptun later this week.

This morning, the court heard the continuation of the testimony of Cowichan Tribes Elder Suliptun, also known as Norbert Sylvester. He spoke of paddling songs and relationships between villages. He told what he knows of Tl’uqtinus, and who told it to him, and what it looked like when he saw the site for himself, possibly in the 1970s. There was just one small shack, and the shore was grown over with blackberry bushes, he said.

He spoke of when his father and uncle were on band council in the ‘50s, how they would complain that they were “just a rubber stamp for what the Indian Agent was doing.” The Indian Agent, appointed by Indian Affairs, called the meetings, set the agendas and ran the meetings. Some of the councillors didn’t know enough English to understand what was said, Elliott said. His father, who spoke both English and Hul’qumi’num, served as an interpreter for some of the councillors and others in the community.

Elliott spoke of how the responsibilities of band administrations grew over the decades, but budgets were still tightly controlled by the federal government. In the ‘70s, Indian Affairs said how much could be spent, and on what. The band could not hire its own lawyers, or choose to spend any money off reserve. Elliott’s testimony continues tomorrow. Court will be in session from 9 a.m. to 11 a.m.

Elliott shared a wealth of knowledge from decades of experience in First Nation administration. He has served as chief, councillor and band manager for Cowichan Tribes at different times. Elliott talked about lands rights on reserve, for individuals and bands. He told the story of what he calls “Indian politics” through the 1950s, 1960s and 1970s — First Nations leaders meeting, organizing and advocating for their interests, especially on the “land question.”

What’s the “land question?” Elliott shared a few: “How did we lose that land? Why don’t we own that land anymore? Who told us we can’t hunt?” These were the questions his father and uncle and others began grappling with in meetings in the 1950s, Elliott said.

Elliott also told of the impacts of residential schools, and how he became aware of them. He did not attend residential school — his father threatened to shoot the official who came to take him away, Elliott testified earlier this week. But he saw the impacts first hand in the late 1960s and early 1970s, when we worked with what was then called the Cowichan Indian Band to encourage school attendance among children. When checking up on those that were missing class, he saw the poor conditions many children lived in. His job became more like that of a social worker — finding out what was going on in those families and connecting them with social agencies.

“Now I understand why those parents were alcoholics, and abused their kids as well,” Elliott said. It was because of the trauma and abuse parents experienced at residential school, Elliott said. But he didn’t know it at the time. People didn’t talk about their experiences at residential schools in the 1960s and 1970s, he said. It was only later that people started to open up. Elliott gives some credit to Delmar Johnnie for sharing his experiences at Kuper Island Residential School with a newspaper reporter. After that, Elliott said, more Cowichan people started talking.

Elliott’s testimony will continue Monday morning at 10 a.m. at the Duncan Law Courts.

The trial will continue in Victoria for about the next two years. What questions do you have about this case, and about land rights in Cowichan? Send an email to let me know: jacqueline@thediscourse.ca.