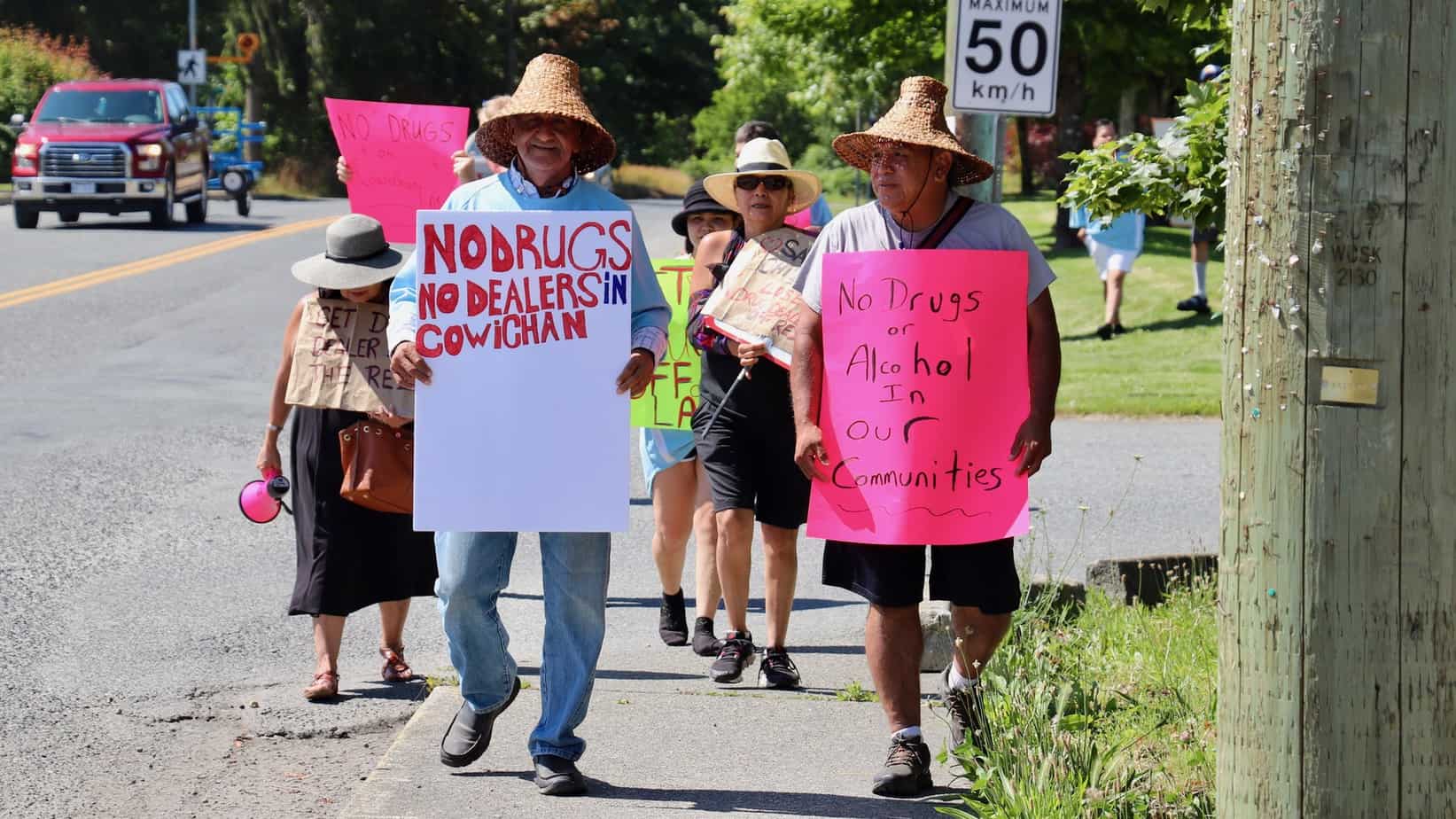 Last week, Cowichan elder Joe Thorne decided he’d had enough. The tragic death three days earlier of 14-year-old Fairlie Johnny marked the fourth suspected drug overdose death of a Cowichan Tribes member in the past month. In anger and frustration, he made a sign that read “No drugs, no dealers in Cowichan” and led two days of protests, including a march to alleged drug houses on the reserve.

“I wanted to wake people up to what we all see and what we all ignore,” he tells The Discourse Cowichan.

And it certainly looks like he has. Fewer than two dozen people joined the protest on July 14. The Discourse Cowichan was the only media outlet present. But since then, Thorne says he has been inundated with hundreds of people reaching out to him to share their concerns, ideas and interest in getting involved.

“I’ve had so many people come up out of nowhere and shake my hand or tap elbows,” he says. ”It’s been mind-blowing. I don’t know how to feel. I’m in awe of the community.”

Last Wednesday, Cowichan Tribes Chief William Seymour announced plans to form a Cowichan Tribes Opioid Crisis Response Task Force. Thorne says there have also been discussions among Cowichan Tribes members about the possibility of banishing drug dealers from the reserves. And Thorne, a School District 79 trustee and First Elder and Knowledge Keeper for the B.C. School Trustees Association, has been talking with a wide range of people to educate himself about the scope of the problem and potential solutions.

“It started with me standing out there like a fool,” Thorne tells The Discourse Cowichan last Tuesday, while standing on the sidewalk outside the Cowichan Tribes offices for the second consecutive day. His cousins Gwen and Brenda Thorne joined him later that first day, he says, also moved by the recent tragedies.

Nineteen-year-old Amber Charlie was among those who joined Thorne on that second day of protests. She was Fairlie Johnny’s “big sister” in a school mentorship program and is close friends with her siblings, she says.

“I don’t know how to deal with my heartache,” she says. “My heart hurts and I don’t know what to do about it. But he [Thorne] does and I want to follow in those footsteps to be one of the people that says this has to stop here. No more children lost.”

After an hour of holding up signs to passing motorists outside the band offices, Charlie, Thorne and about a dozen others walked over to the Boys Road area and stopped at three suspected drug houses. People inside those houses locked the doors and drew the curtains when the group approached, Thorne says.

Using a megaphone, he and others called on the people inside the houses to stop selling drugs, especially to children.

“A lot of us are tired of crying, now we’re getting angry. Stop, just stop” Thorne called out. “This land belongs to our children for tomorrow. We don’t need drugs.”

According to Thorne, last week’s protests may already be having an effect. “It’s been quiet down there,” he says of the three alleged drug houses that the marchers stopped at. “No one is going. We’ve done something; we’ve affected their business.”

‘A gift for our guardians’

At the rally last Tuesday, Thorne thanked Const. Pam Bolton, who leads the First Nations Policing section of the North Cowichan/ Duncan RCMP, for being responsive to the concerns of the community. He presented her with a drum, custom made for her by Coast Salish artist Stan Greene. On Facebook, he posted a picture of the two of them and the drum with the comment, “A gift for our guardians.”

“He [Thorne] is a very important part of this community and for him to honour me and my organization that I represent is very humbling,” says Bolton, who is Cree. “I really appreciate it being a First Nations person myself and having that opportunity to be able to bridge that gap between the RCMP and the community I serve.”

When asked about the RCMP’s response to the specific allegations of drug dealing on Cowichan Tribes land, Bolton declined to comment. “We are constantly working towards locating the people responsible for bringing drugs in and selling drugs within our community,” she says.

Bolton says that she appreciates that citizens are making their concerns known about the overdose crisis. She adds, “It takes a village to come together to find a solution for this.”

And that is exactly what Thorne is determined to make happen. He predicts, “We’re going to get somewhere, somehow, someday — maybe not today, but we will as a race of everyone, not just as a race of Indian and white, but as a community.”

While last week’s rallies targeted drug dealers, Thorne says he is expanding his focus to include what can be done to help people get off drugs. He went out Saturday morning with the Cowichan Clean Up group and has also spoken to many people with first-hand knowledge of drug addictions who tell him that there is a need for local and accessible treatment facilities. Later this week, he has a meeting with Duncan Mayor Michelle Staples, he says.

The overdose crisis is hitting First Nations particularly hard during the COVID-19 pandemic, but Thorne wants to make it clear that “drugs don’t see colours.” He adds that the majority of people who have been contacting him since the protests are non-Indigenous, many of whom are asking to be included in the conversation.

“We’re off to a good start. We’ve got the attention. Now we’ve let the non-Native community know that, hey, we’re all on the same side,” Thorne says. “We just got to get over this nonsense of saying, ‘Well, it’s an Indian thing.’ It’s not. It’s a human being thing.”

Another rally planned for Tuesday

Everyone in the Cowichan Valley is invited to “bring your signs and bring your voice” to the next rally, Thorne says. In addition to signage aimed at drug dealers, he encourages messages highlighting solutions. “I want to see signs that say ‘treatment centre,’” he says, as an example. This time, the plan is to rally but not to march.

Rally participants will meet at 10 a.m. on Tuesday, July 28 outside the Cowichan Tribes band office at 5760 Allenby Rd.

“Standing on the street getting everybody’s attention, people seeing Native and non-Native standing together. I think that’s going to be a powerful message in itself.” 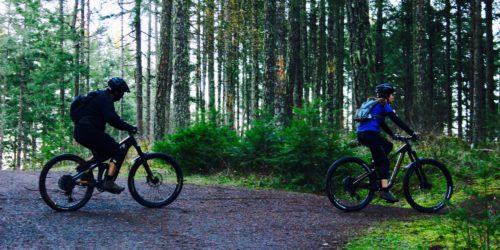 What’s going on with the municipal forest consultation?