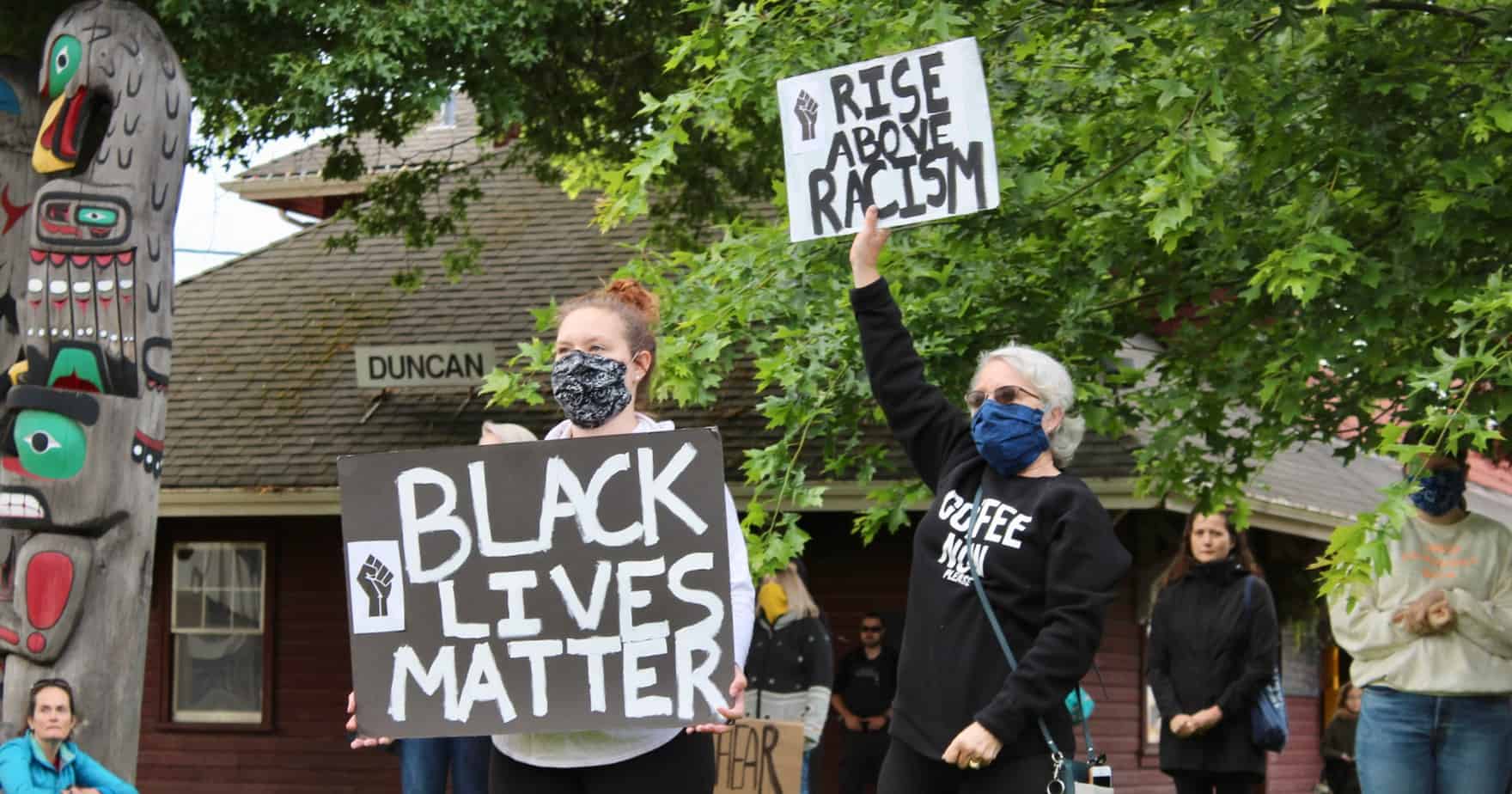 People gathered to oppose racism and violence and call for unity and peace.
Jacqueline Ronson
Support this work. Tell a friend.

On Friday, a few hundred people gathered in Charles Hoey Park in Duncan for a rally in solidarity with Black Lives Matter. The world erupted in protests in recent weeks, sparked after a Minneapolis police officer kneeled for eight minutes on the neck of George Floyd, a Black man, killing him.

The event in Duncan was the brainchild of Antonio Diaz, who launched a Facebook group to spread the word. The Cowichan Intercultural Society helped organize the rally and march with support from many groups and individuals, including the Mask The Valley project.

Video of the rally is available on Facebook, here and here. The Discourse Cowichan took photos at the event. Here are some of our favourites.

Many people brought or made signs in support of Black Lives Matter.

“White guilt serves no one. We need allyship.”

Local Grade 8 student Avalayne insisted that her dad bring her to the rally.

Passing cars honked in support of the protest.

Around the world, Black Lives Matter protests have called to defund police services.

Glaucia Desrochers led the crowd in a song. “We share a dream, and sing with one voice,” Glaucia sang. “I am, you are, we all are human.”

Black Lives Matter was founded in 2013 in response to the acquittal of George Zimmerman, who killed Black teen Trayvon Martin. There’s an official chapter in Vancouver.

Monica Patsy Jones stands with her granddaughter. Monica spoke to injustices at the hands of police against local Indigenous people, and to cases of missing and murdered people that remain unsolved.

The Duncan event focused on calls to end racism and violence against Black and Indigenous people.

Stephen Najera, who grew up in Lake Cowichan, said his life experience is proof that racism is a problem here in Cowichan.

On the back of his shirt, Stephen Najera wrote slurs that people would call him behind his back.

Jayson Williams, a staff member at Shawnigan Lake School, shared lessons from the racist history of his home country of South Africa.

Many people wore masks to limit the potential risks of spreading the coronavirus. Speakers and signs at the event suggested that racism is a pandemic, too.

After the rally, some of the crowd marched down the train tracks.

Editors’s note, June 13, 2020: A previous version of this article suggested that the Mask The Valley project was a lead organizer of this event. It acted in a supporting role.