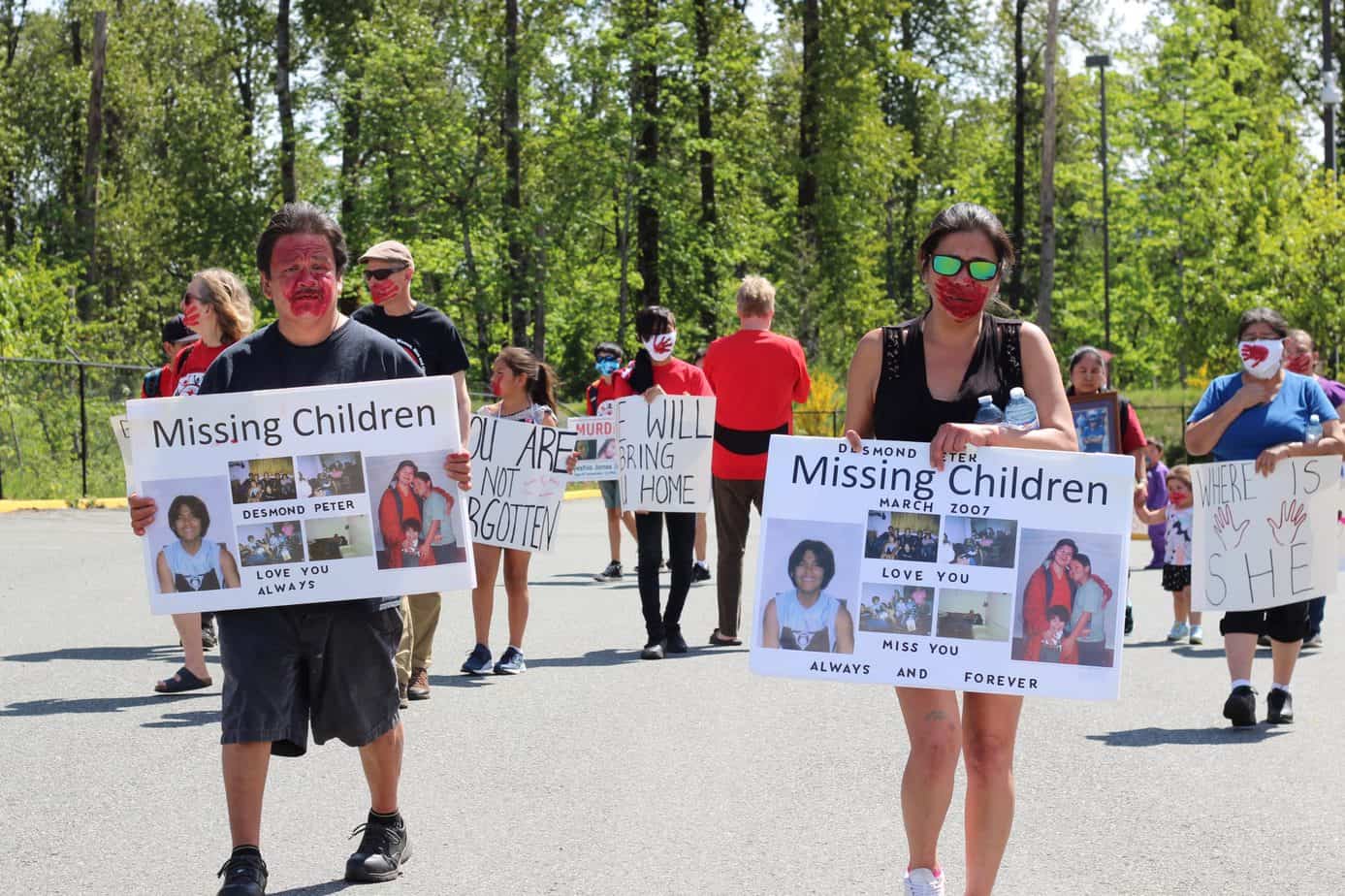 Cowichan grieves for the missing and murdered

Community members gathered in Duncan to remember those who are lost.
Jacqueline Ronson
Support this work. Tell a friend.

On Saturday, May 9 nearly 50 people gathered in Duncan to bring awareness to missing and murdered men, women and children. The event replaced a larger annual walk, cancelled because of COVID-19 restrictions on mass gatherings.

The Cowichan Tribes community is still looking for answers in the disappearance of three men: Desmond Peter disappeared in 2007, at the age of 14. Ian Henry was 26 when he was last seen in August 2015. Everett Jones went missing in 2016 at the age of 47.

There are others, too. Tyeshia Jones was murdered in 2011 when she was 18. Family members still search for Ethan Sampson, 28, last seen as he entered the Cowichan River on the night of Jan. 30, 2020.

At the event on Saturday, community members gathered in support of the families of the missing and the murdered. Some bore a red hand print across their face, a symbol of the silence of those who are lost. Organizers encouraged physical distancing between the demonstrators.

The Discourse Cowichan attended to photograph the event and hear why people had come.

“We’re here for one reason, and that’s for my daughter, Tyeshia Jones,” says Mary Jim, pictured here with with son Latrell, nephew Travis and daughter Aaliyah. A Duncan man pleaded guilty to the murder in 2013. But as long as he still gets three meals a day and Tyeshia’s still gone, “I feel there is no justice,” Jim says.

“I want my son home,” says Elizabeth Louie, mother of Desmond Peter, missing since 2007.”I keep my hopes up about him being out there, but as time passes it gets harder to believe.” She says she wants people who might have information about what happened to her son to come forward and speak.

Rose Henry leads the group with her drum. She says that she has worked to bring awareness to the fact that it’s not just Indigenous women and girls who are at risk. Here in Cowichan, it’s mainly men who have gone missing.

The demonstrators held signs and stood along Highway 1 in Duncan. Many cars honked or waved in support.

Monica Patsy Jones holds a sign with statistics on missing and murdered Indigenous women and girls. According to the Native Women’s Association of Canada, violence against Indigenous women has spiked during the coronavirus pandemic.

A drummer drums for passing cars as they approach the bridge over the Cowichan River.

“Where is she?” asks a sign held by Jeff Leggat.

Anyone with information about missing or murdered people in Cowichan can contact North Cowichan/Duncan RCMP at 250-748-5522. To get involved with advocacy and awareness, connect with Cowichan Missing & Murdered Women, Men and Children on Facebook.