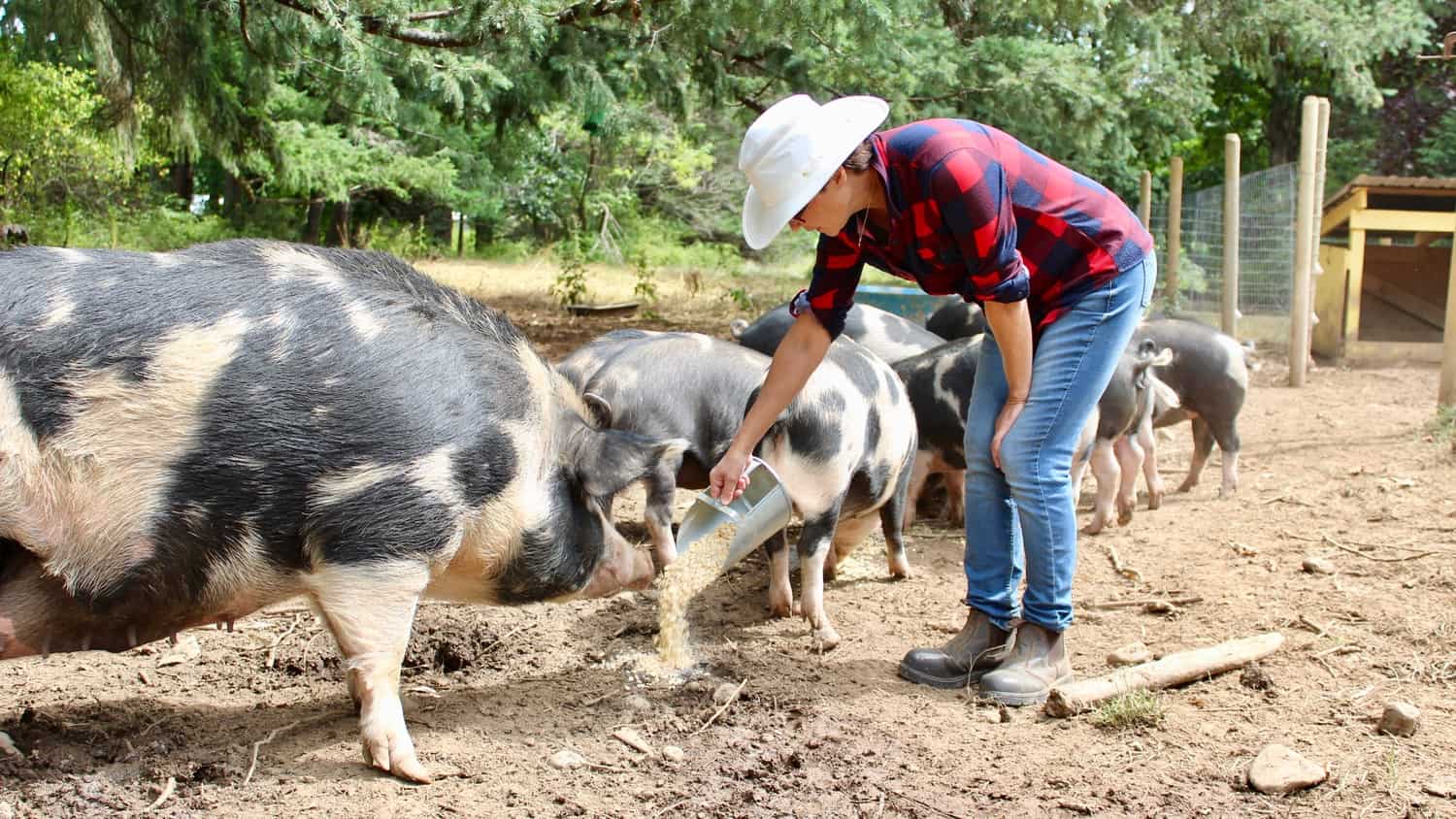 A young farming couple is putting down roots with the help of landowners who share their vision.
Jacqueline Ronson
Support this work. Tell a friend.

On a Sunday morning last month, about 30 people gathered on a Somenos Road property near Duncan, under the silhouette of Mount Prevost. They came to see the farm that popped up there since the land changed hands just one year ago.

It’s hard to believe it’s all so new — the farm was previously mostly a hayfield. There are cows, sheep, pigs, ducks and chickens. There are vegetable gardens. There’s a labyrinth (the kind you walk through, not get lost in) where medicinal herbs grow.

The landowners, Valorie Masuda and Alan Moore, get this question all the time: “Have you seen The Biggest Little Farm, on Netflix?” (Yes, they have, of course!) The film documents an L.A. couple that risks everything on the dream of transforming a dessertified patch of California countryside into a traditional farm, bursting with life.

Masuda and Moore’s dream is similar in its ideals, if more modest in scope. Approaching retirement in their professional careers, the couple imagined a next chapter surrounded by the kind of nature that small-scale farming invites in.

Masuda, a palliative care physician, explains that she has seen many types of people towards the end of their lives.

“The farmers have always had such a most vibrant life, and they’re always so fit right until the end,” she says. “I thought, ‘Oh, I want to die a farmer.’”

What makes Masuda and Moore’s property extraordinary – and the true reason for all those visitors on that day – is the relationship they share with a young couple, Meg Henwood and Callum Bottrell. A year ago, they were strangers. Now, the four adults live on and share in Masuda and Moore’s 9.5-acre property. The couples’ two farm businesses are separate but overlapping, and above all collaborative.

The program seeks to solve a growing problem: People who want to farm often can’t afford to buy land, and people who can afford land often have little interest in farming it.

The ministry recognizes that the cost of land is out of reach for many farmers, and wants to secure the future of farming in B.C., says Azja Jones Martin, with the Young Agrarians. Jones Martin is the land matcher for Vancouver Island and the Gulf Islands. Over the last two years, she’s helped coordinate and facilitate approximately 29 farm lease agreements between landowners and farmers.

The match between the couples on Somenos Road was special. In part because, for the landowners, sharing the property with young farmers was part of the plan and the vision before they bought it.

“Our dream was … to buy a property where we could live on and help partake in that process of permaculture farming, but have farmers who knew what they’re doing,” says Masuda. So they knew they were looking for a property with two residences and enough land to share. When this one came up, they jumped at it.

A month after the purchase, they connected with Jones Martin and the land matching program. She connected them with Henwood and Bottrell. It was a clear fit. “Our visions were very much aligned,” says Masuda.

Jones Martin helped the couples work through their farm lease agreement. Henwood and Bottrell moved into the older of the two residences on the property last December.

From seed to sandwich

Masuda and Moore call their farming operation Valalan Farms (a portmanteau of Valorie and Alan.) Most of the larger animals belong to them. Henwood and Bottrell operate Digable Roots, which is a vegetable and poultry farm and food cart business. Bottrell is a Red Seal chef. The plan, by next spring, is to sell sandwiches, soup and salads at farmers’ markets, from farm ingredients.

“Our motto is ‘from seed to sandwich,’” says Henwood.

(In the opinion of the author, the duck egg salad sandwiches and fennel salad prepared by Bottrell and served at the event were delicious.)

Henwood says she hadn’t considered farming as a viable career choice until she drove from her home province of New Brunswick across the country, and landed on Vancouver Island.

“When I got to the Island, I knew I could be a farmer,” she says. “I knew instantly.”

She credits her education in farming to her time working at Kildara Farms, an organic farm on the Saanich Peninsula.

Henwood describes the land matching process as “easy peasy.” It turned the dream of owning a farm business from fantasy to reality.

Thanks to the farm lease and the relationship with Masuda and Moore, “I still have the opportunity to put all of my life into something and not feel afraid that I’m gonna lose it,” Henwood says.

The challenges of a farm lease

Not every farm lease is such a fairy tale. There are, of course, risks to farmers who invest in developing land they do not own. One farmer who attended the event described losing the land he leased because the property sold.

“We try and make the leases as secure as possible and talk through those eventualities,” says Jones Martin. Leases can include clauses like passing on the lease in the event of a sale, or compensating the farmer for losses. Ultimately it comes down to finding terms of an agreement that works for both parties.

While there are lots of landowners looking to lease, and lots of farmers looking for land, perfect matches don’t come along every day. One challenge is housing, says Jones Martin. Many landowners can’t offer a place to live on the property, which is harder for the farmers. Many of the land opportunities are essentially hayfields, which require a significant investment of time and infrastructure to convert into farms that produce food for humans.

The COVID-19 pandemic has spurred interest in growing local food, Henwood says. “I’ve met several people now that are actually starting farms and looking for land because of the shock and the changes that have happened. And I’m excited to see that keep rolling.” Accessible land is still the biggest hurdle, she says.

The opportunity in the Cowichan region is enormous, says Masuda. “We sit in the bread box of the world. But we’re not taking care of the land.”

Masuda and Moore have long believed in buying food as locally as possible, they say. Now, they get to be a part of expanding local food production. And, significantly, they have created an opportunity for Henwood and Bottrell to build a sustainable business and life for themselves.

Asked where she sees her business in five years, Henwood says she’s looking much farther into the future.

“My ultimate dream is to bring nourishment back into the ecosystem that exists,” she says. “I want to see the pond running year-round. I want to see the hayfields transformed into more than just vegetables, but an ecosystem with trees and layers of soil that are fully nourished. And just a place [where] people can come and feel really good and relaxed, and they can be fed and healthy. I want to feed people.”