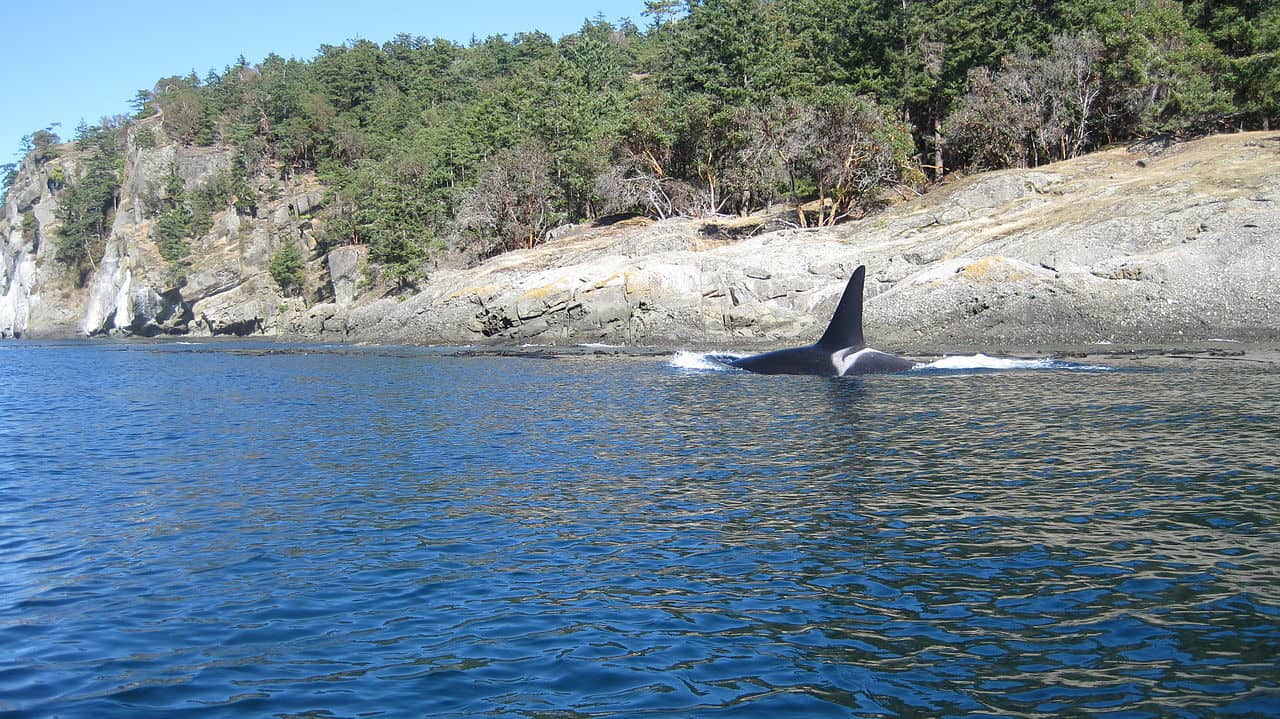 A male orca swims off the shore of Stuart Island, Washington, in 2009. Photo by Erik Stockdale/Wikimedia
Cowichan Valley

How has the pandemic been for whales?

A reader wanted to know how whales have been doing through COVID-19. I asked some experts.
Morgan Powell
Support this work. Tell a friend.

I’m Morgan! I’m a masters’ student in journalism at UBC, and as part of an internship I’ve been looking to answer some of your questions for The Discourse.

Back in May, The Discourse reported on the impact of the pandemic on a local whale watching business. One of our readers commented on the story, and asked how the pandemic has been for the whales.

I wanted to know, too. In particular, southern resident killer whales are endangered, with a population of 73 whales coursing through the Salish Sea. How are they, and the other local whales, faring?

I asked a couple experts.

I spoke to David Barclay, an assistant professor of oceanography at Dalhousie University who has been tracking underwater noise in the Salish Sea, about his recent research.

In a paper recently published online by the Journal of the Acoustical Society of America, Barclay reported that the first three months of 2020 were significantly quieter at underwater noise monitors in the Salish Sea. The reduction in low-frequency noise coincided with a decrease in commercial shipping traffic, due to economic impacts of the pandemic.

While the exact impact on whales is still being studied, there’s plenty of evidence that marine mammals prefer peace and quiet.

I asked Barclay if the reduction in noise has had positive implications on marine life.

He responded, “In our case here in the Salish Sea, I say that would be the hypothesis. It’s very likely and the work to confirm that is being done right now. … This is a good thing but the data set to back it up is still being collected.”

How does noise impact whales?

“Being exposed to noise can increase stress levels,” Barclay says. It’s similar for humans. “If you live by the freeway, [it’s] probably not quite as nice as living by the park,” he says.

Whales use sound to hunt, navigate and communicate. So, more than just an annoyance, certain noise can impact whale behaviour and threaten their survival. The louder the environment, the harder it gets to just do daily activities. Very loud noises can damage whales’ hearing, just like in humans.

Many creatures are impacted by underwater noise, Barclay says. “There’s a huge number of animals in the ocean that use sound – not just limited to whales. Fish make noise, shrimp make noise, and crustaceans make noise.”

The low hum produced by the engines of big ships can travel thousands of kilometres, Barclay says. There are few places in the ocean free of this kind of noise.

I also spoke with Richard Dewey, the associate director for science with Ocean Networks Canada, which is an initiative of the University of Victoria. Dewey says that research into the effects of the reduction in underwater noise is underway. However, it’s a long-term endeavour.

The COVID-19 pandemic is an opportunity to assess exactly how whales respond to a quieter environment, Dewey says. “We’ll take full advantage of this opportunity. It’s an unplanned, unscheduled, involuntary experiment that we’re conducting.”

If scientists can show that reduced noise will help save the whales, then it becomes possible to build better management plans on that knowledge. For example, U.S. National Oceanic and Atmospheric Administration is now considering an application from the U.S. Navy to expand underwater testing and training, which would disturb an estimated 51 killer whales each year.

“If we strive as a society to get back to what was normal beforehand, … we don’t necessarily provide the long-term benefits that are going to be necessary to save [the Southern Resident Killer Whales],” says Dewey.

Can we build a “new normal” with more local consumption and less reliance on shipping? “Those are very complicated societal questions,” Dewey says. But he and other scientists are doing the work to figure out that that world might look (and sound) like, for the whales and for us.

How you can help