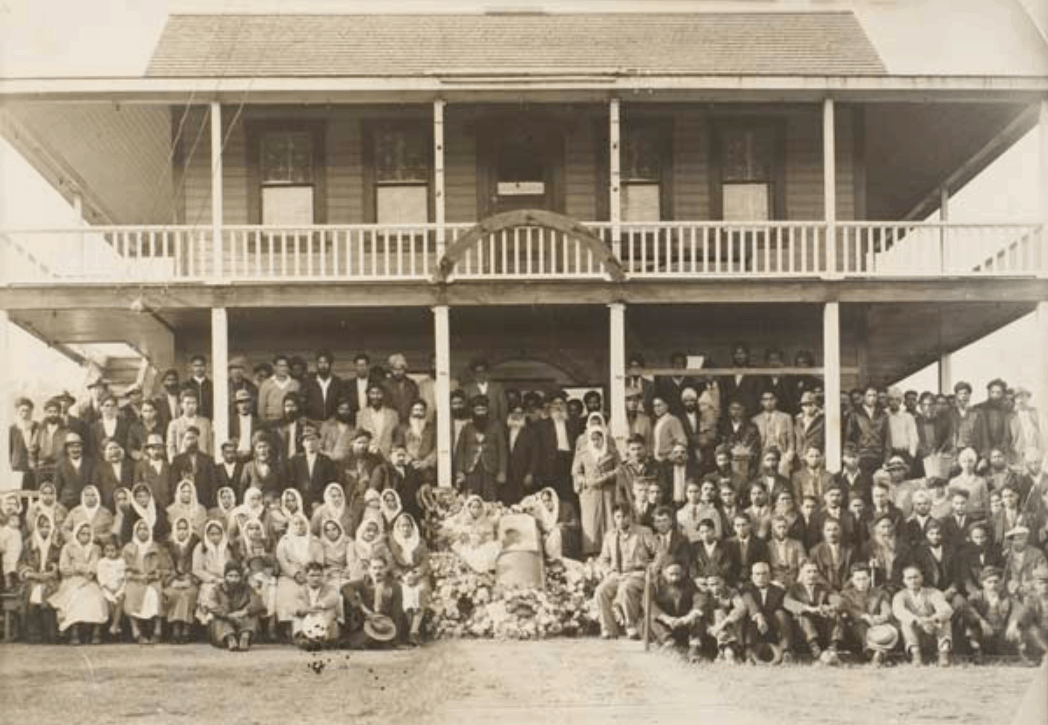 The Paldi community gathers in front of the gurdwara in 1936 for the funeral of Mayo Singh's son, who died of meningitis. Cowichan Valley Museum and Archives
Cowichan Valley

A glimpse into the rich Sikh history in Cowichan

Why the town of Paldi was a major centre for Punjabi immigrants in Canada.
Jacqueline Ronson
Support this work. Tell a friend.

For more than 130 years, the Cowichan Valley has attracted Sikh immigrants, mostly from the Punjab region of Northern India. The Sikh history in Cowichan is rich, and goes well beyond the story of the former village of Paldi and its temple, which this year celebrated its centenarian. And the community remains strong today, though much has changed over the years.

“It would be good to know more history of the area, especially of the Sikh community,” John Scull told The Discourse Cowichan in our recent survey.

I was curious, too. So last Sunday I walked into the Duncan Sikh Temple on Sherman Road and followed the sound of chatter to the lower level. The first person I met welcomed me and invited me to stay to share a delicious lunch of vegetarian food. After, some of the temple leaders met me in the office and answered my questions.

The story begins, by many accounts, with Mayo Singh. Mayo was born in 1888 in a village in India called Paldi, and came to the Cowichan region from the Lower Mainland in search of land for a lumber operation. He found it between Duncan and Lake Cowichan, in the spot now known as Paldi. The town was first called Mayo Siding, and later just Mayo, and eventually Paldi.

A town sprung up around the Mayo Lumber Company, which at one point employed 600 people. Paldi boasted a post office, a grocery, a school and a gurdwara, or Sikh temple.

“That’s where people came, because Mayo Singh would give people jobs in the sawmill,” Tek Manhas tells me. Tek grew up in Paldi and is also a councillor for the Municipality of North Cowichan.

The town of Paldi was a major centre for Punjabi immigrants in Canada. It was also famously diverse and integrated. “The Japanese and the Chinese used to come to the temple, there,” Tek says. “And we’d go to Sunday school. It was a really close-knit group.”

The Paldi mill closed in 1945. But the community stayed strong, and even went through a baby boom in the ‘50s and ‘60s. The men still largely worked for the Mayo Lumber Co., and commuted to newer mills at Summit Lake and in Nanaimo.

Slowly, though, Paldi emptied out as people moved closer to their work. In the ‘70s and ‘80s, the Sikh community strongholds were at the mill towns around Cowichan Lake — Honeymoon Bay, Mesachie Lake and Youbou. Chanchal Singh Thiara, president of the Vancouver Island Sikh Culture Society, which runs the Duncan temple, tells me that in those days most of the Sikh community lived out there.

Paldi was mostly deserted. For a time in the ‘60s and ‘70, hippie squatters, mostly from Ontario, lived in some of the abandoned buildings. After that, it was basically a ghost town. Then in 2005, local fire departments torched the derelict structures for fire practice. But the temple still stands, and still attracts community members who remember the old days in Paldi for gatherings and programs.

Today, there are about 300 Sikh families in the region says Chanchal, adding that most live close to Duncan. The younger generation is well educated, he says. So they have good jobs, but many are moving away to the Lower Mainland for opportunities. Retirees often follow their children, moving to help raise grandchildren, he tells me. But Sikh newcomers are still moving to Cowichan, so the numbers pretty much balance out.

There are three basic principles of Sikhism, Chanchal tells me. They are, to meditate on the name of God, to share your earnings with the poor and to earn your living through honest means. Hard work is valued, and it is an important symbol of success to own your own house.

The temple is open for everyone, Surinder Singh Pagely, another community leader, tells me. “Anybody can come, no questions asked. We believe in only one God. These doors are open for everybody. We don’t even ask who you are. We are proud of this.”

The temple will host a three-day-long program, January 10 to 12, to celebrate the birthday of the 10th Guru, Guru Gobind Singh. All are welcome to come and share a meal. Chanchal says he will be there and will gladly answer questions about Sikhism and the Sikh community here in the Cowichan Valley.

What are you curious about? Send us your questions about Cowichan’s people and places, past and present. We love hearing from you.