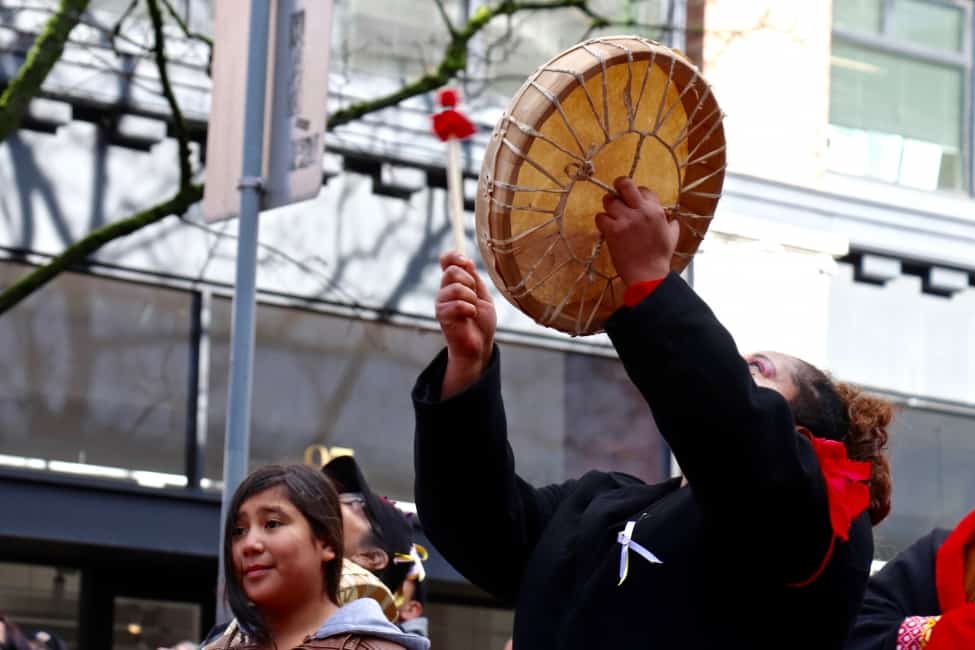 “Justine,” whose human rights complaint the tribunal has now agreed to hear, walked in the annual Women’s Memorial March in Vancouver on Feb. 14, 2018. Brielle Morgan/The Discourse

This is a ‘groundbreaking’ decision, lawyer says.

It’s “groundbreaking,” lawyer Aleem Bharmal says of a recent B.C. Human Rights Tribunal decision to hear a complaint from an Indigenous mother who alleges that social workers discriminated against her by keeping her children away from her.

The decision, released April 30, 2019, means the case will now move forward to schedule a hearing.

The Vancouver Aboriginal Child and Family Services Society tried to have the complaint dismissed, but tribunal member Devyn Cousineau rejected VACFSS’s arguments. The mother’s allegation that she was discriminated against deserves a hearing, Cousineau said in her written decision.

Bharmal is representing the mother, who alleges that VACFSS — one of 24 Delegated Aboriginal Agencies in B.C. authorized by the government to deliver child-welfare services to Indigenous people — discriminated against her based on her race, ancestry, colour, and mental disability.

“Justine” (whose real name we’re withholding to protect her children’s identities) has been fighting to get her kids out of care since VACFSS social workers apprehended them in August 2016. The Discourse has been covering her child-protection trial for over a year in Provincial Court, while her kids stay in temporary foster homes.

Justine first filed her human rights complaint against VACFSS in August 2017, seven months before the Provincial Court began hearing her child-protection case to determine whether her kids should be returned to her or put into permanent foster care.

VACFSS denies discriminating against Justine, according to the tribunal’s written decision to hear the case.

“[VACFSS] says that, at all times, it has acted within the scope of its authority under the Child, Family and Community Service Act and made decisions consistent with the best interests of the children,” Cousineau wrote in her decision. “It says that there is no evidence in this complaint capable of linking [Justine’s] race, ancestry, colour or disability (real or perceived) to its conduct in respect of her children.”

Lawyers for Justine and VACSS will meet with the tribunal in early June to set a date for the hearing.

According to the tribunal’s written decision, Justine alleges that VACFSS’s decisions to “deny her custody and restrict her access to her children are based, in part, on stereotypical and prejudicial assumptions about her ability to care for the children in light of her Indigeneity and mental health.”

The Siksika mother, who spent her own childhood cycling in and out of care, also alleges that VACFSS used her perceived intergenerational trauma as reason for “putting up barriers to her getting her children back into her care.”

The case centres around a series of meetings between Justine, VACFSS and their respective lawyers in 2017. At these meetings, according to the tribunal decision, Justine alleges that VACFSS made discriminatory comments, resulting in adverse treatment.

According to the tribunal, Justine alleges in her affidavit that “social workers relied on stereotype rather than an assessment of [Justine] on her own merits, and further failed to work towards accommodating [Justine’s] needs, instead pursuing the most drastic option of apprehension.”

These allegations, if proven, could potentially show discrimination by VACFSS against Justine, Cousineau wrote in her decision to hear the case. None of the allegations have yet been proven in tribunal.

VACFSS declined to comment on the tribunal’s decision to hear this case.

He says he felt compelled to take on Justine’s case after he heard her story, but he wasn’t confident she’d win, let alone get a hearing.

While a few discrimination cases have been brought to the B.C. Human Rights Tribunal by families against the Ministry of Children and Family Development before, the tribunal decided the evidence provided in those cases wasn’t strong enough to warrant a hearing.

In Justine’s case, however, the tribunal found that she had “taken her complaint out of the realm of speculation,” and presented enough evidence to warrant a hearing — though VACFSS may challenge her allegations and demonstrate that its conduct was “reasonably justified in light of [Justine’s] actual needs and its mandate to protect [her] children.”

“Trying to prove discrimination was a factor in a government service is quite a challenge,” Bharmal says. “So the fact that we were able to provide enough evidence to warrant a hearing in this case is a breakthrough.”

If the tribunal sides with Justine after hearing her complaint, it could set an important precedent, he continues.

“This would be an important legal precedent because it would help develop the law in this area and guide how the government needs to deal with Indigenous children in foster care,” he says.

“It could open the door to similar legal challenges and, potentially, a group action because we know that, as the decision points out, there is a gross overrepresentation of Indigenous people in the child apprehension system.”

This piece was edited by Robin Perelle. To follow Brielle Morgan’s ongoing coverage of Justine’s trial, subscribe to our weekly Urban Nation newsletter.