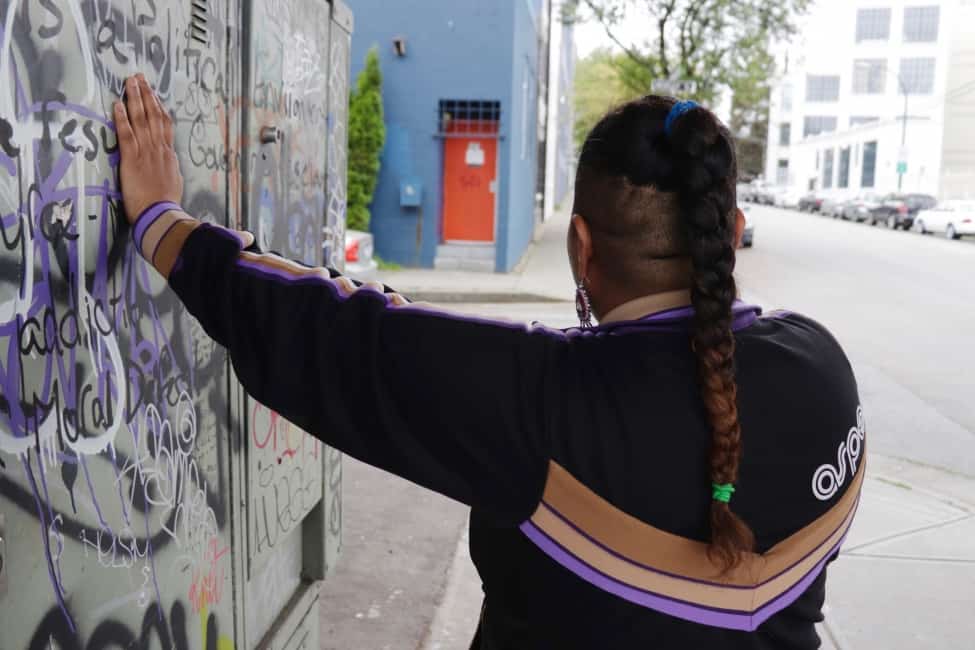 Justine expects to be fully reunited with her three of her four daughters by Sept. 1, 2019. Brielle Morgan/The Discourse

After a three-year battle, this Siksika mom says she’s reached an agreement with B.C. social workers to bring her daughters home.

Nearly three years after her daughters were apprehended by B.C. social workers, “Justine” seems poised to get three of her four girls back.

Justine, whose real name we’re withholding to protect her children’s privacy, has been fighting to be reunited with her daughters ever since social workers from Vancouver Aboriginal Child and Family Services Society (VACFSS) removed them in August 2016.

At the time, her girls were 13 years old, seven, five and four months. Her child-protection trial started more than a year ago in B.C. Provincial Court.

Justine has long maintained that her daughters’ removal and her family’s forced separation were unjustified. In a separate legal action, she filed a human rights complaint against VACFSS that the Human Rights Tribunal has now agreed to hear.

Representatives from VACFSS have denied discriminating against Justine. They repeatedly told the court during her child-protection trial that she is ultimately unfit to parent her kids, alleging she had previous issues around alcohol, behaved abusively toward her children and left the girls with inappropriate caregivers.

“This is a mother who loves her children, but she cannot seem to step out of the old trap of her own trauma to actually address the child protection concerns,” lawyer Susie Gray argued. She described Justine as “an Indigenous person whose family is a product of colonial subjection and degradation.”

After the court spent more than a year hearing from nearly a dozen of VACFSS’s witnesses, Judge Lyndsay Smith suddenly broke with convention in April 2019.

As The Discourse reported, an unsuccessful request from Justine to transfer her case to the Aboriginal Family Healing Court prompted Judge Smith to try to adopt a more collaborative approach consistent with the principles of the Aboriginal court’s pilot project.

Describing the Aboriginal court as “an embodiment of a recognition that there are factors and considerations and issues at play in the context of removals and Indigenous kids,” Judge Smith called for a special case conference.

The case conference took place April 23-26, 2019, but because its proceedings were confidential and closed to the public, The Discourse could not cover who attended, what was said or what took place.

But according to Justine’s lawyer Carrie Humchitt, after the conference Justine and VACFSS reached an agreement to gradually increase the frequency of visits between the three youngest girls and their mother, with a goal of returning them to their mother’s care by Sept. 1, 2019. Until then, the girls will remain in their temporary foster placements.

To date, no agreement has been reached regarding her eldest daughter, who is now in her mid-teens.

“I can’t wait,” she told The Discourse in June. “I think that’s actually a little bit too long.”

“My kids are being returned without ever needing protection to begin with,” she says. “They should just give my kids back and give me an apology, and just let us live our lives.”

VACFSS declined to comment on the agreement, stating that privacy rights outlined in the Child, Family and Community Service Act prohibit them from doing so.

Justine says she’s confident that she has the skills to parent her girls. “It’s in my blood,” she says. “I was the oldest girl growing up and just kind of, you know, taking care of my brothers and sisters, walking them to school.”

She wants her girls to grow up with strong connections to their Blackfoot culture, and she fears they wouldn’t get “the proper Indigenous teachings and cultural sense that they should” in government care.

“I just feel that my children belong with me,” she says. “If I really didn’t care, or if I didn’t want them, I wouldn’t have fought as hard as I have.”

The case has been “deeply personal” to Justine’s lawyer, Carrie Humchitt, a Gitxan woman who’s seen her own family and community impacted by the child-welfare system.

“My grandfather up north in Gitxan — he was 104 years old when he died, so he’s seen a lot,” Humchitt told The Discourse. “He’s seen pretty well all of his children taken away [to] residential school, and that was a trauma for my grandparents. Every day that they took them away, it was a trauma.”

“That’s what a lot of First Nations people go through,” she says. “I can’t separate my First Nations from being a lawyer. That’s exactly why I got into it.”

She’d like to see the Aboriginal Family Healing Court model that the judge tried to adopt in this case applied broadly to other cases.

“When we couldn’t get referred to the healing court in New Westminster, we kind of adapted it ourselves and made our own healing court. I would like to see it happen in Vancouver,” she says. “That’s something I’m going to push for.”

Going forward, she says Justine’s family still has big barriers to overcome, namely the challenge of rebuilding their relationships.

And then there’s the fear of the system. “I think that’s a fear every parent has, that if they do one misstep that it’s going to lead back to apprehension,” Humchitt says. “They feel like they’re under the microscope and anything that they do is going to be subject to scrutiny. It’s very real.”

This piece is part of our in-depth coverage of B.C.’s child-welfare system. It was edited by Robin Perelle.