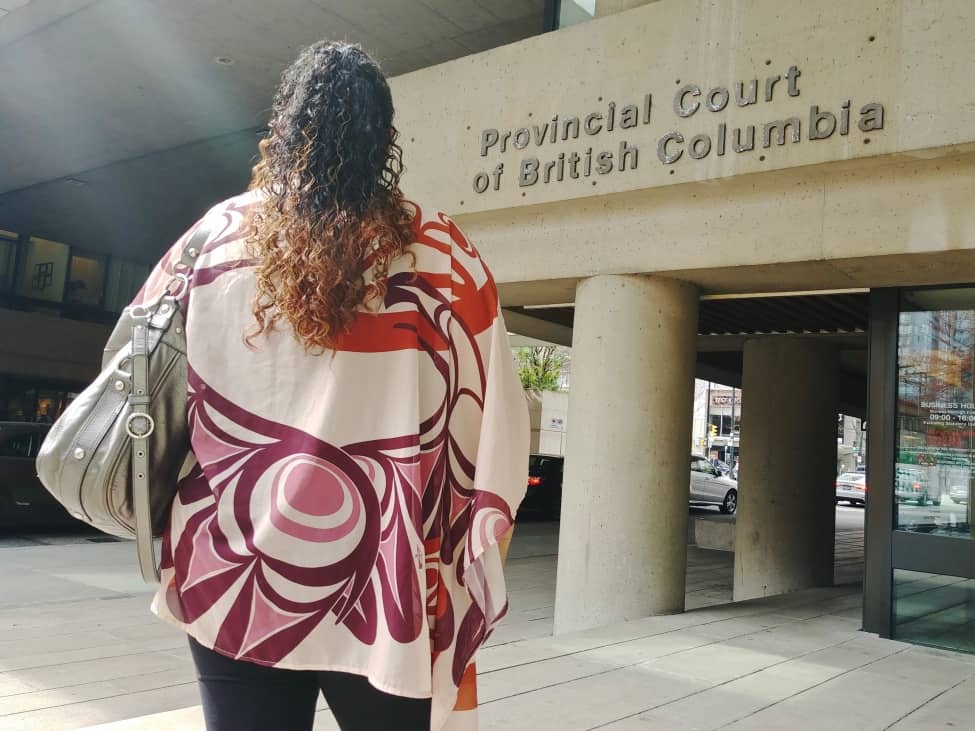 This Siksika mom has been fighting to get her daughters out of care since 2016. “I want to be heard,” she says. Brielle Morgan/The Discourse

“Justine” has spent 24 days in a Vancouver courtroom listening to social workers describe why she’s allegedly unfit to parent her four daughters.

The Siksika mother, whose real name we’re withholding to protect her children’s identities, has been fighting to get her kids out of care since they were apprehended in August 2016.

Her child-protection trial, which the court has been hearing in chunks separated by long waits since March 2018, has been an emotional, adversarial process. Both Justine’s lawyer, and the lawyer representing the Ministry of Children and Family Development seeking to permanently remove her children, have remarked on the length and complexity of this particular trial.

This week the proceedings took a series of surprising turns — and Justine initiated them.

What if we transferred this case to Aboriginal Court?

During a private meeting (called a family case conference) between Justine, the social workers, their respective lawyers and a judge on April 2, 2019, Justine suggested her family’s case be transferred to the Aboriginal Family Healing Court in New Westminster — a pilot project launched in 2017 to better serve Indigenous people.

Judge Lyndsay Smith, who’s been presiding over Justine’s trial in B.C. Provincial Court, seemed to welcome the possibility of transferring the case to the Aboriginal Court, where Elders and healing circles are instrumental to a process that’s intended to be more culturally appropriate.

“It seems like it could be exactly the right place for you to be,” she said, wondering out loud why the lawyers hadn’t raised this idea sooner.

Smith suggested that a restorative Indigenous approach could potentially resolve in just one day what has yet to be resolved in the mainstream court system after more than a year.

Justine heard about the Aboriginal Family Healing Court through a friend who works for the Spirit of the Children Society, one of the partners that helped establish it. She says she pitched the idea of her case being heard there to social workers from the Vancouver Aboriginal Child and Family Services Society (VACFSS) a long time ago, before her trial began.

“I tried to tell the workers that I want my file to be transferred out there,” she told The Discourse outside the courthouse on April 2.

“I was shut down numerous times,” she alleged.

Susie Gray, the lawyer representing VACFSS and the Ministry of Children and Family Development, said she doesn’t recall this idea being raised in any meetings between Justine, the social workers and the lawyers. It’s definitely the first time the lawyers have talked about it, she told The Discourse. Justine’s lawyer, Carrie Humchitt, concurred.

Asked why the ministry hadn’t explored this option sooner, Gray said she didn’t know. “I don’t have any idea. We had these trial dates set, and we’ve just been plodding along.”

Gray says she’s never had a case transferred to the Aboriginal Family Healing Court. “The thing is we so seldom go to trial,” she said. “Usually we’re dealing with mediations and case conferences and resolution.”

Justine’s lawyer said the transfer would be meaningful. “I think it would mean everything to this process to have it in front of an Indigenous court,” Humchitt told The Discourse outside the courtroom.

An Aboriginal Family Healing Court Conference provides an opportunity to conduct a healing conference in a more traditional setting for Indigenous families. Elders participate to support the parents, and the emphasis is on healing and cultural safety, according to a March 2018 article published in the Vancouver Bar Association’s magazine, The Advocate.

Healing Court conferences use teachings, including the Medicine Wheel and Four Directions, the seven sacred teachings and healing circles, to allow for more culturally appropriate processes, the article notes. Elders work with the family to create a Healing and Wellness plan. If families complete the plan, a cultural ceremony is held to honour their successes.

“The role of the judge is somewhat like the role of the ‘keeper of the circle’ in a healing circle,” Judge Rosemary Gallagher and Elder Kathy Louis wrote in The Advocate. “The judge helps to maintain focus and attends to the pace of the dialogue.”

“It’s a shame that there are not more courts and it’s just considered a pilot project,” Humchitt told The Discourse. “Aboriginal families are so grossly overrepresented in the child-protection system, and you really need a way to deal with it other than an adversarial system.”

At the end of the day on April 2, the judge and the lawyers were in agreement: it would be in everyone’s best interest to try to get Justine’s case transferred to the Aboriginal Family Healing Court. They just needed to make some calls and lock down the next available date.

Justine said she was relieved by the prospect of a transfer because she feels her relationship with VACFSS is damaged beyond repair.

“I don’t have any trust with VACFSS,” she said, adding that past mediations left her feeling unheard. “If I don’t take VACFSS’ whatever offer they want to put on the table then I don’t get — I won’t get my visits, I won’t get to move forward. It’s their way or the highway.”

With her suggestion finally being pursued, she said she felt for the first time like she had some power in this process.

“And having the judge also back up what I’ve been saying for so long — that, you know, it should have been with Indigenous courts,” she added.

She said she was looking forward to finally getting to tell her story to a judge.

“I’ve waited for three years to have my side be heard,” she said. “I feel that if I can come in front of a panel of Elders that, you know, have grandchildren, that are in the community themselves, and if I’m able to talk to them and explain to them my side of the story and why I feel the way I feel dealing with VACFSS, I feel they would be able to understand both points of view.”

“They know what it’s like to be separated as children from their parents, you know, with the history of residential schools,” she added.

On April 3 the lawyers returned to the court at 2 p.m. to update the judge on their efforts to transfer the case: Neither had been able to connect with the coordinator for the Aboriginal Family Healing Court.

Judge Smith also had an update. She’d learned that Justine’s family isn’t eligible for the pilot project because their file falls outside of the project’s jurisdiction, which is limited to families with files in ministry offices in Burnaby, New Westminster or the Tri-Cities.

Gray concurred, saying VACFSS management had confirmed that cases held by the Vancouver-based agency are “excluded from the pilot project.”

“Certainly in the future there’s the hope that VACFSS can access that,” she added.

According to an email from the Ministry of Children and Family Development sent to The Discourse on April 3, “an evaluation of the pilot project in New Westminster for the Aboriginal Family Healing Court Conference is still in progress and will be completed by September 30, 2019.”

Plans for expanding this pilot to other communities will be considered once the evaluation’s complete, according to an emailed statement from the Ministry of the Attorney General.

Still intent on shifting to a more collaborative and less adversarial process, Gray, Humchitt, Judge Smith, Justine and the social workers decided to plan their own extended conference at the Vancouver courthouse.

They will invite Elders to join them. And they’ll use dates already booked for this trial’s continuation — April 23 and April 24.

In calling this special conference, Judge Smith seemed to acknowledge the potential limitations of the existing court system in dealing with cases involving Indigenous families. She described the Aboriginal Family Healing Court as “an embodiment of a recognition that there are factors and considerations and issues at play in the context of removals and Indigenous kids.”

While they may not be able to access the pilot project’s resources, they can still strive to incorporate “some of that structure, some of the philosophies and approaches,” Smith said.

Justine said she still feels “pretty good” about this outcome because it will involve Elders, and she’ll finally get a chance to share her story with Judge Smith.

In the meantime, she’s got a community of family, friends and colleagues standing behind her. They’ve flowed in and out of court during her trial, and many of these women share similar stories.

During a break in the trial on April 2, Marlene Henry described her experience with the child-welfare system. It still affects her today even though her six children are now adults.

Henry, who is Justine’s aunt, says she came to support her niece because she never received support during her own court hearings.

“I’ve watched her struggle with her family but I’ve watched her never ever give up on her family,” Henry told The Discourse outside the courthouse. “I see that same core of what I was, and that’s never giving up.”

Henry hopes Justine is reunited with her four children, but says that alone cannot be the final outcome of this trial. “I’m hoping she’ll get support and not an anchor around her like VACFSS — I mean real support. Someone that’s going to enable her to take care of her kids, take care of herself.”

Dana Campbell has supported her cousin throughout the trial, too, but Tuesday was the first time she came in person to the courthouse.

She points out that the removal of Indigenous children from their families, culture and homes has been a long-standing issue in Canada, beginning with residential schools, then the Sixties Scoop and now what some refer to as the Millennium Scoop. Campbell hopes Justine’s case will help end this.

“This is where the history [has] got to stop,” she says. “I’d like my family reunited so we can start our healing process in the right way.”

This piece was edited by Robin Perelle. To follow Brielle Morgan’s ongoing coverage of Justine’s trial, subscribe to our weekly Urban Nation newsletter.