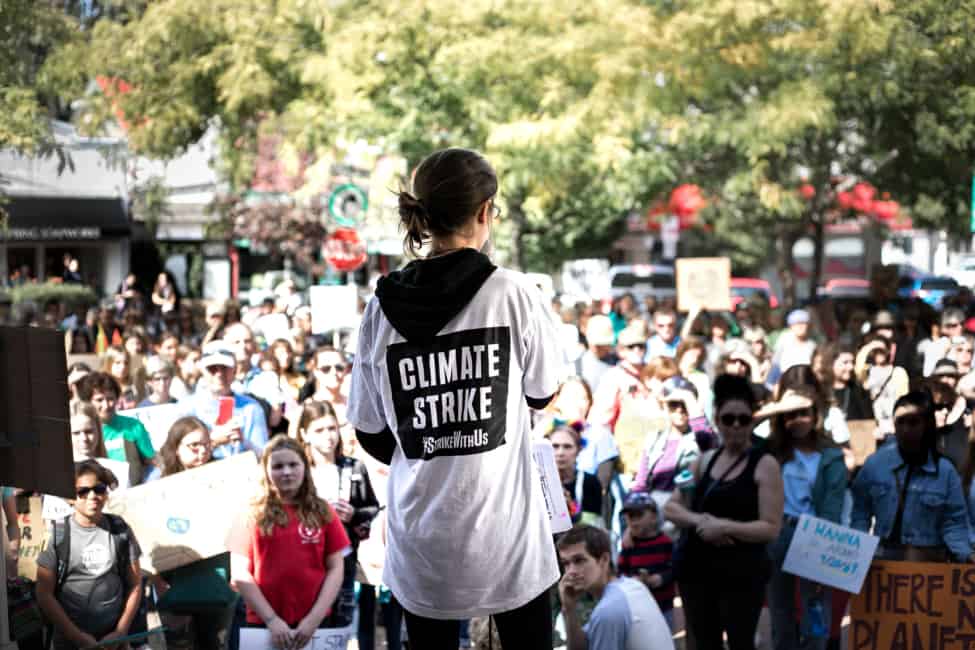 One of them is suing the federal government for failing to protect youth from climate health impacts.

Last week, 15 Canadian youth launched a lawsuit against the Canadian government for failing to act on climate change. The young people each claim that climate change has impacted their health and wellbeing.

Among them is Duncan local Sierra Robinson, 17. Robinson suffers from Lyme disease, made more common by the spread of ticks in a warming climate, according to the statement of claim. Her asthma is exacerbated by wildfire smoke. Droughts are making it harder for her to grow food on her farm and enjoy local swimming holes. All of this contributes to symptoms of anxiety and depression that have increased in correlation with the impacts of climate change, the lawsuit says.

Governments of Canada and British Columbia acknowledge the real impacts of climate change on physical and mental health. According to Shannon Waters, Island Health’s medical health officer for the Cowichan region, Cowichan’s changing environment represents “the most catastrophic threat” to the health of people in the Cowichan Valley.

“In my holistic view of health, the health of our environment is our health,” said Waters, who is a member of Stz’uminus First Nation, in an interview with The Discourse Cowichan earlier this year. “It’s affecting our mental, emotional and spiritual health … We’re having health impacts already. We don’t need to wait 10-to-15 years. We need to start acting on some of this stuff now.”

The Discourse Cowichan recently spoke with Robinson and two other Cowichan Valley youth who are involved in climate and environmental activism here. They told us about their worries for the future, and that getting together and doing something about it seems to help. (Experts, for the record, tend to agree.)

Here they are, in their own words:

“I’m really scared about the climate changing and the oceans rising, and stuff, because I live right on the water there, in Cowichan Bay. And the water is getting higher every year. We all know that. It’s starting to affect houses there. The climate is changing and starting to cause these huge storms that are destroying whole cities, and whole houses and families. And people are dying.”

“I’ve done quite a bit of the petitioning for the One Cowichan petition to have a climate emergency declared. That’s when adults have been the rudest to me about it. They’ll tell me, like, ‘It’s not real,’ or ‘We won’t do anything until China starts doing something.’ It makes me so angry. They’re like, ‘It’s a future problem,’ and the thing is that the future is pretty soon, and it’s my future. I have a little sister and I have a lot of cousins, and I really don’t think that they’re going to be alright. If we don’t do anything now, they’re not going to get to my age, or 20, or anything like that.”

“It’s hurting me because this is the only place that I’ve ever lived. I’ve only ever lived on Vancouver Island. It’s so drastic right now. … I have to watch my home die every day. And that’s sad. And it feels kind of shitty that I can’t actually just snap my fingers and make a change. That makes it really difficult.”

“Going to meetings and planning stuff like this [climate strike] really helps. It helps me feel like we can actually make a difference in something like this. It helps me feel like we’re building a community for our youth to help change and help getting our voices to be heard. Once people actually start listening to the youth — like, people that need to be listening to youth — once they start to, then there’s going to be no stopping. I know that once people start listening, everything will be fine. But it’s going to take a little bit of work. A lot of work.”

“But I’m not in any danger because of it, right now. It doesn’t hurt me. I’m more fighting for the people who it does impact the most. Like, there’s local reservations that are really low, and really prone to flooding. And they’ve been flooding for a long time, but that’s only going to get worse with the weather changes that come with global warming and climate change. So it’s upsetting to see how it’s affecting my community and the people around me.”

“Our ecosystems sustain themselves, and they’ve sustained themselves for forever. But then, humans stepping in and ruining it piece by piece is really heartbreaking, especially for the people who have been here for thousands of years without issue. I think that the worst part about it for me is that it’s affecting my friends and my community and a lot of people who did nothing wrong.”

“Especially because we have a lot of water around in Cowichan, I’d be afraid for droughts and flooding and stuff like that. Because we’re very reliant — especially Indigenous communities, are very reliant on the Cowichan River, and Cowichan Lake.”

“Things that make me hopeful are events and hearings, and knowing that change could happen. Like, the lawsuit that Sierra is a part of. That gives me hope, because it’s concrete proof — it’s very evident that people are trying. People are working for this. And they’re succeeding. And sometimes they’re not, but that’s OK, because we’re trying. I think that all we need is to try. And that’s all of us.”

“[Climate change is affecting young people in the Cowichan Valley] in so many different ways. It’s affecting the physical spaces that we live in. Our rivers and lakes are drying up to extreme amounts every summer. To the point where next summer we might not even have water in the rivers by the end of the summer. The droughts are affecting our crops and our ability for agriculture, which is threatening our food security and our water security. Wildlife, water security, food security and also the wildfires are really, really damaging to our communities as well. It really scares us a lot.”

“While that’s all on a physical level, it’s also mentally really impacting us. It’s a lot. And a lot of young people are really depressed and scared and I think that that’s an issue that many people in the Cowichan Valley, and many youth in general, feel like they have to deal with. It’s because, like, the severity of all these issues and problems that we face, that we hear about constantly on the news, and then not knowing how we can change that. Because it’s such a big thing, you know?”

“It’s an emotional heaviness and it’s impacting me in ways like not wanting to get up out of bed some mornings. And being like, I don’t know how to deal with all of this. And sometimes I feel very alone as an activist. I know I’m not the only one that cares about these issues, I know there’s many other people doing it. But it feels like you’re kind of like, you don’t know how to act, right? I change that by surrounding myself with community, surrounding myself with like-minded people. And doing things that I love, and bringing activism into them.”

“People have known about climate change. They know about these problems and yet continuing to deny it, or say that it’s not an issue, or that they’re going to be dead by the time it’s a big, big disaster anyways — that just feels really irresponsible, and frustrating. We’re seeing impacts of this all, now. But imagining my future, what it might look like for my children and grandchildren, I think it’s selfish not to act. This isn’t about us, necessarily. It’s about us, in a way, but it’s also about future generations, and the future of the planet in general.”

“I have two different visions in my mind [for Cowichan’s future.] One is a vision of seeing beautiful spaces. It becoming even more of a community spot, where we’ve got community gardens and better food security, better water security, a really strong community that’s inclusive and diverse, and really beautiful. That grows the majority of its own food and is not only sustainable, but regenerative in the way that we’re not creating more pollution and problems. We’re adding to this beautiful environment, in a way that’s beneficial.”

“So that’s one vision. The other isn’t as happy. It’s more of seeing an increase in wildfires and logging, which is the reality of right now. We’re dealing with wildfires, we’re dealing with logging all around us. We’re dealing with droughts and storms and all these different issues. Loss of biodiversity, and loss of healthy forests. Loss of security in our community, in general. And I’m just seeing that amplified. Amplified to a version that’s really, really terrible. To a point where like, we are no longer living in comfort, and more living in this constant state of fear.”

“I think we have the possibility to create that beautiful vision, if we all do everything that we possibly can. I feel so much weight, sometimes. And I’m like, how am I going to do all of this? Sleepless nights where I’m trying to write speeches, and organize things. But speeches don’t change the world. It’s the people power, of the communities coming together. And I think that [September’s climate strike] was a really good example of the community coming together. So I’m hoping that will do something.”