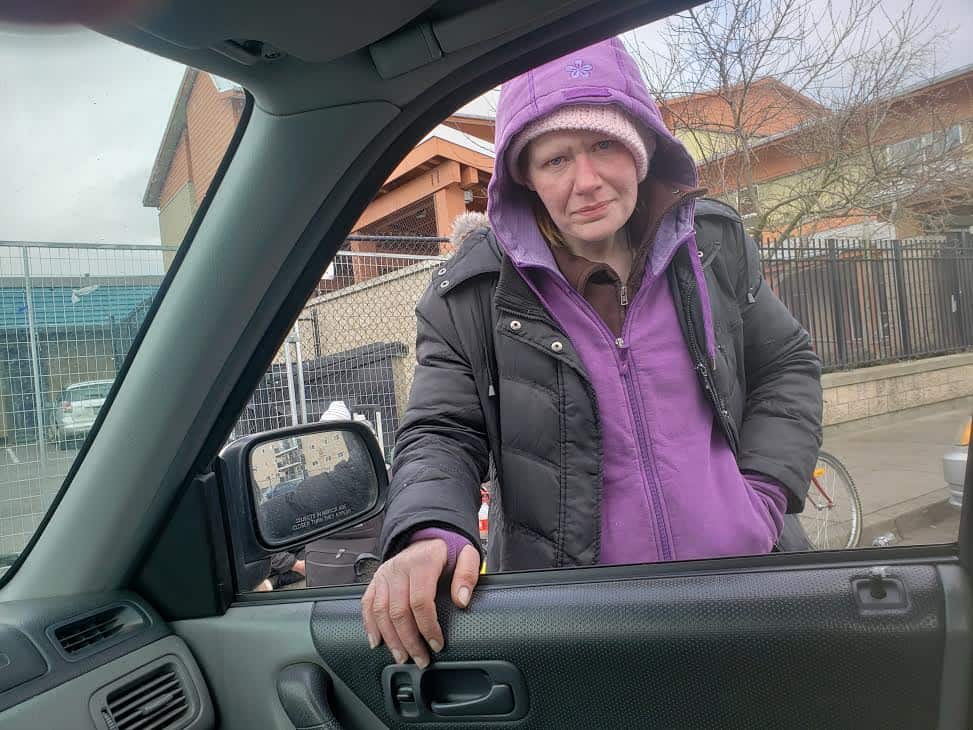 Emma Nunn says that life on the streets is getting a lot more challenging as facilities close and services are reduced. Credit: Clara Rempel

COVID-19: How are people on the streets coping?

Hungry, afraid, and nowhere to go. Homeless people in Cowichan share their struggles.

Over the past few months I’ve talked to dozens of people experiencing homelessness on the streets of Duncan. They’ve shared their daily struggles to find food, shelter, sanitation and safety. Now, in the midst of the COVID-19 public health emergency, those struggles are much, much harder.

As I reported last week, homeless shelters are cutting capacity, public spaces are closed, and essential services are cut back or shut down as organizations grapple with keeping people safe through this crisis.

Another major blow came on Monday when the Cowichan Valley Basket Society announced that it would have to close the food bank and soup kitchen in Duncan for at least a week due to a possible case of COVID-19 among its staff. The food bank isn’t just a source of food. It’s a community centre, where people can come to spend the day, comfortable and among companions.

A reader of The Discourse Cowichan sent us these questions: “With all the community centres closing, where are homeless people using washrooms? Where are they eating? How can those of us with resources (for now, anyway) help?”

I’m currently self-isolating at home. But this week I’ve reached several people by phone who are experiencing homelessness or looking out for people on the streets. Here’s what I’ve learned.

“It doesn’t seem logical to me. If people are worried about getting sick, then why put all of us out on the streets where we have no place to be isolated?” asks 29-year-old Emma Nunn. Nunn, who is from Duncan, says she has been living on the streets for three years due to an opioid addiction that was triggered by a back injury. “What if we get sick? What are we supposed to do? We can’t go home and stay at home.”

Nunn says she’s been turned away from the women’s shelter and the Warmland House shelter each time she’s tried recently, because there were no available beds. She tells me on the phone on Monday afternoon that she had slept part of the previous night in a covered area outside the Margaret Moss Health Unit. It was the first time in four nights that she had slept at all. People on the streets tell me they often avoid sleeping because it can leave you vulnerable to assault and robbery, or to avoid drug withdrawal symptoms, or to stay warm.

But it’s the daytimes that have changed the most, Nunn explains. “We have nowhere to go during the day where we can just be and not be bothered,” she says. “Anywhere we could hang out is closing up.” The libraries, the community centres, the food bank, coffee shops — nearly everything, for now, is closed to the public. Without those spaces, people without homes are scattered around town, hanging out in small groups, she says.

Finding a place to use the washroom and wash hands is challenging, too. “Honestly, we’re squatting in the bushes like wild animals,” Nunn says. “If it’s illegal for us to urinate in public, it should be illegal for people to turn people away from bathrooms.”

Nunn says that this past Sunday she panhandled enough money to buy food, with some people tossing money on the ground instead of handing it to her. When I spoke with her at 2 p.m. on Monday, she tells me she hadn’t eaten any food yet that day.

“People are being a little more generous now because everything is closed. But it’s been pretty hard,” says Nunn. Over the phone, her voice breaks and she starts to cry.

“It’s gotten a lot harder to find food,” says 44-year-old Bill Scholefield. When I speak on the phone with him early Monday afternoon, he tells me that he hasn’t eaten anything since Saturday.

Up until this week, Scholefield says he relied on the food bank Monday through Saturday, and Warmland House and Sunday Sandwiches on Sundays. The food bank is now closed, and Sunday Sandwiches is officially closed (although a volunteer did give out pre-bagged lunches this past Sunday). Warmland gave take-out meals on Sunday, but Scholefield says he didn’t make it there.

He says he was relieved to see a note posted outside the food bank that Meals on the Ground, which normally is served at Duncan United Church, will serve food at 5 p.m. Monday, Wednesday and Friday in the Mound area off Trunk Road, near Canada Avenue. He says he doesn’t know what he is going to do for food on the other days. His plan: “If you don’t think about it, you don’t get hungry.”

Warmland is also working to fill the gap. The shelter will serve take-out dinners at 5 p.m. outside its gates for the foreseeable future, and lunches will be served at noon as well, for at least the rest of the week. But getting information about where and when food will be available remains a challenge.

Scholefield says that he has been living on the streets of his hometown of Duncan for about two years and became addicted to opioids after taking a prescription for Oxycontin for a work injury 10 years ago. In response to the COVID-19 crisis, Scholefield says he has spent some nights recently at a friend’s house, where everyone is doing their best to stay physically apart from each other.

I ask Scholefield what he wants the public to know about the current situation for people living on the street. He replies, “That we’re humans. I haven’t been homeless my whole life. I was one of them, not too long ago.”

Adrian Sylvester runs the Sasquatch Clan Patrol, a one-man show dedicated to checking on people on the streets. He says he heads out by bicycle several days a week to do his rounds. He has experienced bouts of homlessness in childhood and as an adult, and says it motivates him to take care of others. He has his ear to the ground on the streets of Duncan, so I asked what he’s hearing and seeing.

When I reach Sylvester Tuesday afternoon, he is out “on patrol.” I have seen Sylvester in action, wearing a bright orange safety vest and a “Gone Squatchin’” hat. I spent a morning this winter tagging along with him during visits to homeless hangouts such as Centennial Park, Vancouver Island University, Warmland and the food bank.

This week, he tells me that many people living on the street are troubled by the news reports about shortages of food and other items. “It’s getting them scared because they’re poor and can’t buy anything, so they’re wondering what the heck they’re going to do to survive,” says Sylvester. “Everybody is thinking it’s the end of the world now.”

People are in despair, and that will lead to more overdoses and deaths, Sylvester tells me. He says that in a single day last week, he administered naloxone to three people who had overdosed.

“They’ve totally been turned off everything in their life right now,” Sylvester says. “They have nowhere to shower, nowhere to wash their hands, nothing like that.”

He says that a few people living on the streets are covering their mouths with kerchiefs or scarves. However, while many are trying to keep distance from each other, Sylvester says he continues to see groups of people huddled together on the sidewalks outside Warmland House.

He reports seeing members of the public distribute food and clothes to groups of homeless people. But help is urgently needed on a much bigger scale, Sylvester says.

“People on the streets need help. … They’re doing sheltering everywhere else, but nobody is getting homes here.” Some cities have announced plans to shelter people without homes during the pandemic. For example, Victoria plans to open three outdoor homeless shelters, and Vancouver is getting hotel rooms for people who need to be in islolation.

Here in Cowichan? Officials say they are working on it. Duncan Mayor Michelle Staples confirmed in a Facebook post that the Cowichan Housing Association is leading a task force on housing in place. Staples says more information will be shared in the coming days.

How can you help?

Here are some of the organizations working to keep people without homes safe through the crisis, and how you can help.