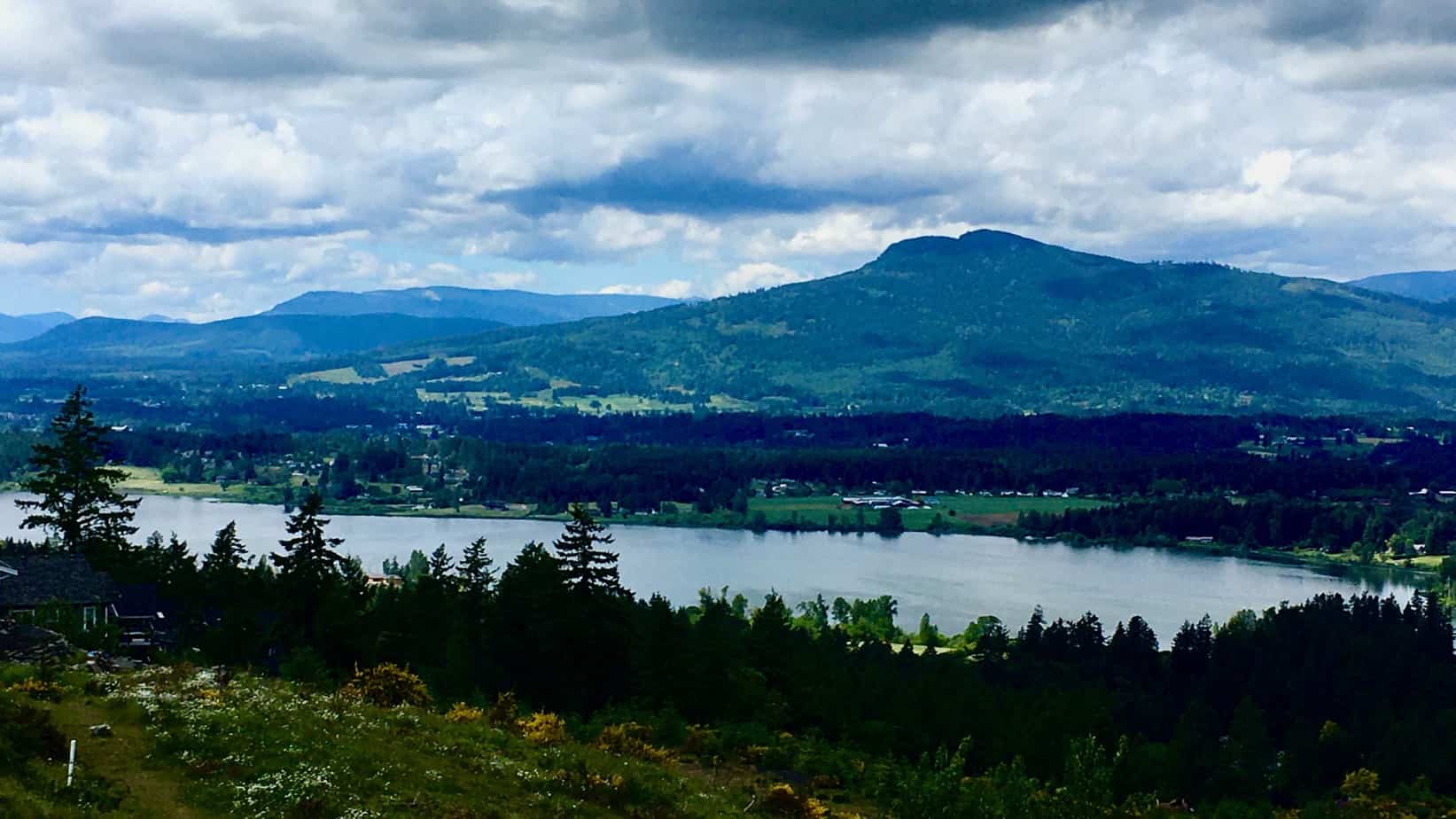 Looking at Swuq’us you can’t help but see the effects on colonization on the physical landscape. The missing forests and the houses serve as a reminder to how the world has moved on and how Swuq’us has become Mount Prevost. Photo by Jared Qwustenuxun Williams/The Discourse
Cowichan Valley

How did Mount Prevost get its name?

The mountain defines the Cowichan landscape, and it has carried more than one name.
Jared Qwustenuxun Williams
Support this work. Tell a friend.

I want to begin by raising my hands to all those who take the time to submit questions and to all those who read my stories about the history of Quw’utsun. When I got this question my mind started racing with ideas.

A reader wrote in with a question about the story of Mount Prevost, the great mountain that defines the Cowichan Valley skyline.

The first thing I thought was, this is two stories, because the mountain has at least two names. Today, I will share the story of James Prevost, the British naval captain whose name now dots several features of the British Columbia landscape. And in a future newsletter, I’ll share the ancient story of Swuq’us, the name the Quw’utsun people gave to this important mountain.

As always, I’ll use a few Hul’q’umi’num words and leave a glossary below.

Swuq’us has been an icon of Quw’utsun for as long as there have been hwulmuhw people to gaze upon it.

No where else is this more understandable than when floating amongst the islands of the Salish Sea. From Hwu’tlupnets you can see the silhouette of the iconic two-peaked mountain far off behind the new settlement of Maple Bay.

Elders have said that it could be seen as they paddled home from the mainland. Specifically they could see the peaks when they came through what was once known as Cowichan Gap but is now known as Porlier Pass.

The hwunitum eventually would name many features of the Cowichan landscape after their heroes, but for a time they called Swuq’us simply “Cowichan Mountain.”

I knew a few things about Captain James Prevost before writing this piece, but I learned a lot more doing some research. Most notably, I learned about how a war almost erupted between the British and the Americans, over a pig!

James Charles Prevost was an esteemed captain, who would later become an admiral, in the British Royal Navy in the mid-to-late 1800s. The son of esteemed Rear Admiral James Prevost, James Jr. was born in Bedhampton, Hampshire, England in 1810.

Young James joined the navy in 1823, at the ripe old age of 13, and by the age of 40 he was a commander aboard H.M.S. Portland on the west coast of North America. H.M.S. Portland was the flagship of Rear Admiral Fairfax Moresby.

It should be noted that in 1842 our James married the daughter of Rear Admiral Fairfax Moresby and they had five children.

In 1856 James Prevost was named first commissioner to help resolve the San Juan Islands dispute. The maps published by George Vancouver and Charles Wilkes were not clear enough in the vicinity of Southern Vancouver Island to make a definitive line for the border.

While the British supported Rosario Strait as the border, the Americans pushed for the border to fall in Haro Strait, thus leaving the San Juan Islands in dispute.

After meeting several times with American officials on board the H.M.S. Satellite docked at Esquimalt Harbour, the commission could not come to a final decision.

So in mid-1859 American settlers began to arrive on the islands and the ambiguity of who owned the San Juan islands inevitably led to hostility between the U.S. and Britain.

This hostility culminated in the Pig War, where no one was hurt and only a pig died. It’s said that an argument between two settlers, Lyman Cultar from the U.S. and an Irishman named Charles Griffin, began the war with an argument over a pig.

The story goes that Cutlar said to Griffin, “It was eating my potatoes,” and Griffin replied, “It is up to you to keep your potatoes out of my pig.” Cutlar shot and killed the pig, which led to the British and Americans escalating their military presence in the area to protect their citizens. Eventually the military presence was called off and the land dispute was settled.

Even though Captain James Prevost was not successful in his task to solve the San Juan Island dispute he was nonetheless honoured by the Crown.

The bay on Prevost Island was named James Bay after the esteemed captain. A nearby inlet was named Anette inlet after one of the captain’s daughters, yet this bay was already named Hwtl’uquyxum by hwulmuhw people.

And, as we now know, Swuq’us was renamed to Mount Prevost after James Charles Prevost.

Swuq’us is the ancient name of this mountain, and the one with deep roots in the story of the Quw’utsun people. But the story of Captain Prevost is part of the history of this land, too.

Huy ch qù for the great question. As I said before I love these Cowichan history questions so keep them coming! You can share your questions by filling out this form.

Thanks for all of your feedback that you would like help pronouncing these words. Spelling them phonetically is challenging because there are too many sounds in Hul’qumi’num that don’t exist in English. We hope to share recordings of the words from these newsletters soon. In the meantime, you can hear me pronounce some place names and sounds on my YouTube channel. Or, check out First Voices to learn more words and sounds.