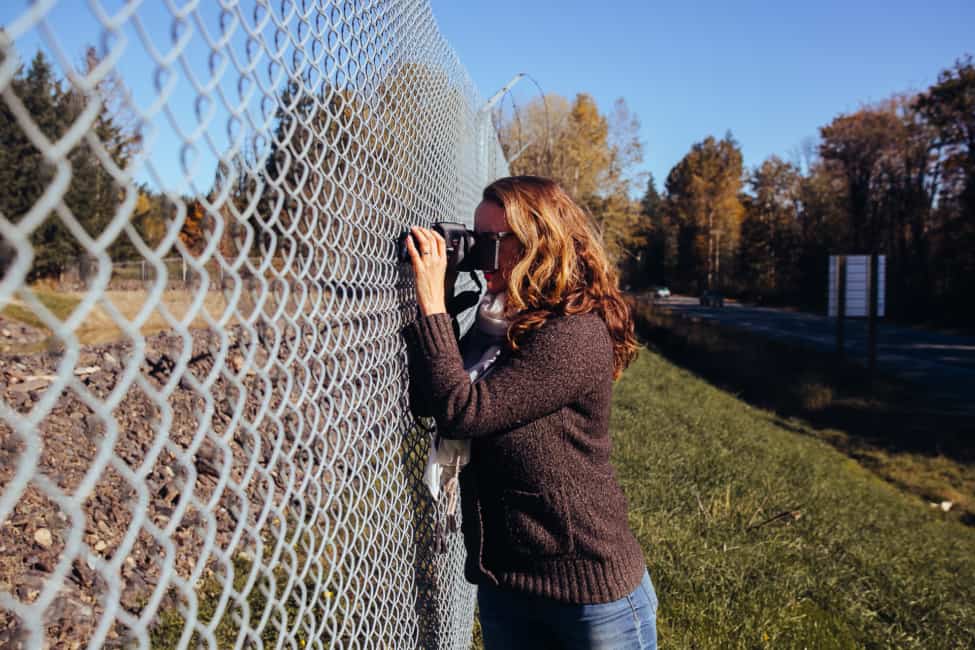 Jacqueline Ronson, reporter for The Discourse Cowichan, snaps a photo of the Vancouver Island Motorsport Circuit through the property's fence off Highway 18. Jenny Holden/The Discourse

The motorsport circuit story that almost never got told

When the Cowichan Valley Citizen suppressed critical coverage of the Vancouver Island Motorcircuit because of an advertising relationship, The Discourse Cowichan stepped up.

Last week, I sat in a room with hundreds of people who may not have been there if the Cowichan Valley Citizen was the only news source in our community. It was a monster public hearing over two evenings about the Vancouver Island Motorsport Circuit’s plan to rezone its property and triple the footprint of its track.

As the hearing got underway, most of the Cowichan Performing Arts Centre’s 731 seats were full. Council listened to public input until no one present had anything more to say. Just before 2:30 a.m., the Municipality of North Cowichan council voted to reject VIMC’s proposed expansion.

No matter which side you’re on, last week’s hearing was an inspiring show of citizen engagement. It reflects just how much we care about the future of Cowichan. So it’s hard to believe that local concerns about VIMC’s expansion plans nearly didn’t get covered in the news. For me, the story of how Cowichan locals inspired me to investigate suspicions that criticism of the expansion was being suppressed by the Cowichan Valley Citizen shows exactly why we need independent, community-powered news — and why I think you should support The Discourse Cowichan’s efforts to provide just that.

When I joined The Discourse in early 2018, I never imagined that I would eventually become a mini-expert on a motorsport track. My plan was to investigate environmental issues. But unlike in the more traditional newsrooms where I have worked, The Discourse approach is to listen to and empower community members to influence what stories we report.

Initially, I was hesitant and skeptical when I started to hear from community members about controversy surrounding VIMC. I had seen the protesters on the side of Highway 18, complaining of racetrack noise. I had done my own research. Coverage in the Cowichan Valley Citizen was sparse, and seemed to show that the complaints were overblown. As a former community newspaper reporter, I trusted that the reporter had done his homework.

It all started with suspicion that the Citizen suppressed critical coverage

But the Sahtlam Neighbourhood Association claimed the Citizen wouldn’t cover the issue because the owners of the track pulled all the ads for the car dealerships they own. That claim seemed least believable of all, but it got my attention.

At The Discourse I, as the journalist, don’t get to choose what to report on without your input. So rather than chasing the environment story, I asked Cowichan to vote on the next topic I would investigate. You voted for me to tackle the VIMC issue.

Then, I dug in. I spent hours combing through documents and newspaper articles. It became clear that the story of VIMC was entangled with the story of the closure of the Cowichan News Leader Pictorial, and the decline of local news in general. I spent days poring over the Citizen and other newspapers owned by Black Press, looking for car dealer ads from the GAIN group, which also owns VIMC. I went to many meetings and talked to dozens of people. My team at The Discourse spent many hours fact-checking every word.

I became an expert on this one issue because you asked me to. You told me this isn’t just about fast cars, but about your local democracy.

My investigation showed ample evidence that the Cowichan Valley Citizen stopped reporting on citizens’ concerns about VIMC because of an advertising relationship between VIMC’s owners and Black Press.

But the story was so much bigger than just a dispute over noise. It was concrete proof showing the real consequences of the collapse of local news to communities across Canada. This is the story of what happens when newspapers cannot or will not hold governments and businesses to account.

After The Discourse Cowichan shone a light on the Citizen’s failure to cover VIMC fairly, the newspaper started reporting on both sides of the conflict. Last week’s huge turnout at the hearing should not be surprising. Research shows a clear link between the health of local news and citizen engagement. Local news helps people have a say, and people who feel like they have a say will speak up.

“Your story on Black Press, it gave us new life”

After the hearing last week, I walked through a small crowd on my way out of the Cowichan Performing Arts Centre. A woman I didn’t recognize stopped me and put two hands on my shoulders. Her eyes were wet with tears. “Thank you,” she said, and pulled me in for a hug. “Your story on Black Press, it gave us new life.”

This isn’t about one side, or the other. It’s about journalism that serves people, by revealing truths that some might not want exposed.

And it’s also about telling stories that bring communities together instead of tearing them apart. By sharing the complicated, messy reality that we live in, journalism can help us see each other, and understand each other.

Journalists’ instinct is too often to amplify conflict, to simplify the story until it’s black and white. But you’ve taught me to really listen. To dig into complexity and seek the ways that we are all truly in this together.

I’m only able to do work that is truly accountable to the community because a portion of readers choose to financially support The Discourse Cowichan. Our goal is for the majority of our funding to come from our local audience so we continue to be accountable to you, not advertisers. I hope you’ll consider contributing what you can so I can bring this approach to other issues that are important to you.

The Cowichan Valley is growing and changing rapidly. We’re struggling through a housing crisis, environmental change and a mental health epidemic. We’re fumbling through conversations about racism and reconciliation. You’ve told us these issues are important to you. As always, we invite your feedback. Send me an email to let me know how we can best cover these issues.

Now, maybe more than ever, Cowichan needs vibrant local journalism that’s accountable to the public. The Discourse Cowichan is working hard to establish a new kind of media that answers to you. But we can’t do it without you.

Support us today to show your support for independent local journalism.

Residents say their concerns have been heard, as racetrack lawsuit settled in Cowichan