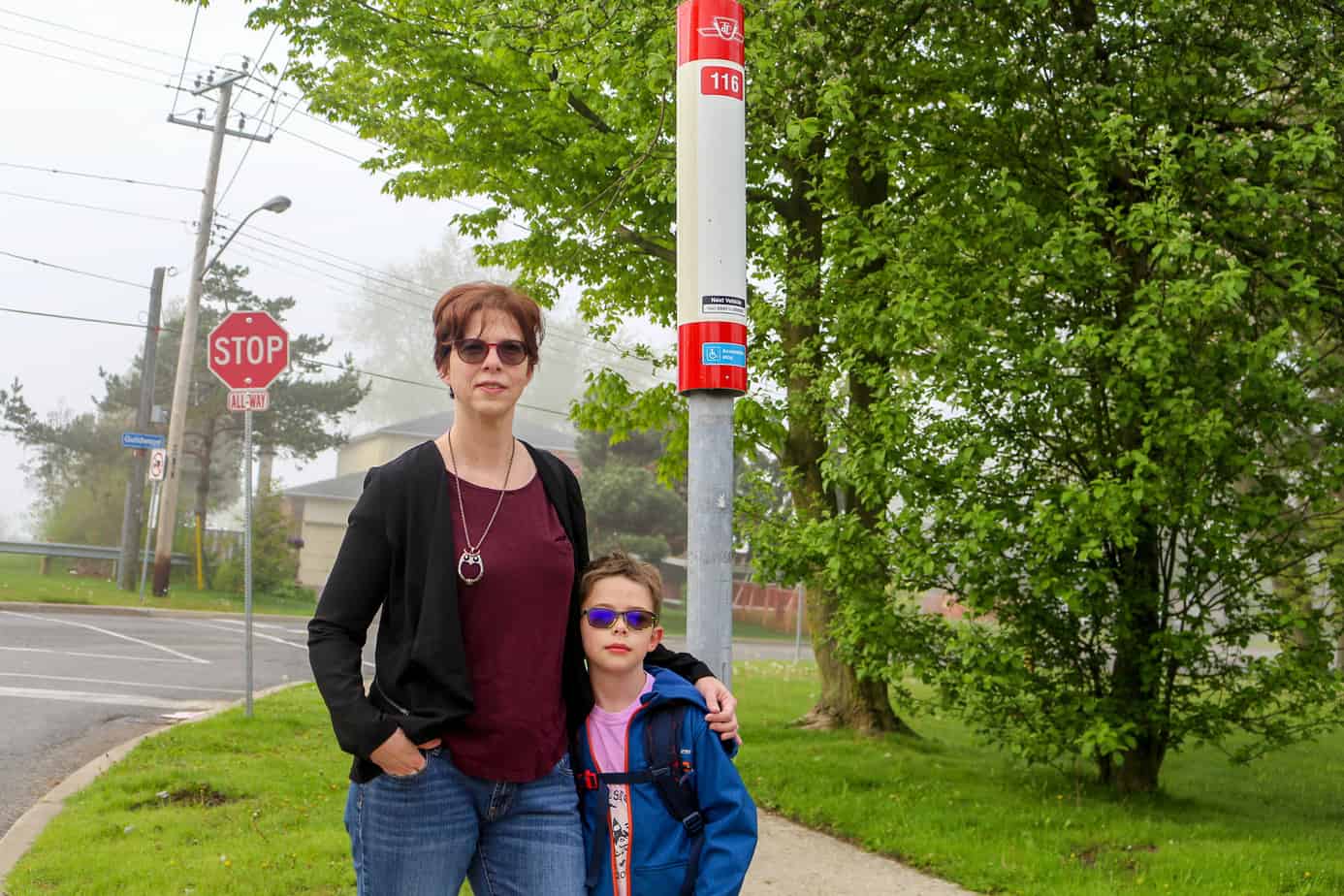 Jennifer Gruden and her eight-year-old son Liam stand at the #116 Morningside bus stop, a 10-minute walk from their home in Scarborough. Osobe Waberi/The Discourse
Scarborough

Our data analysis confirms: This suburb’s average access to transit is three times worse than the City of Toronto.
Osobe Waberi
Support this work. Tell a friend.

The City of Toronto may seem like a bustling centre with no shortage of transportation, but for many residents who live outside the downtown core, relying on public transit can be an exercise in frustration. Scarborough residents in particular say their subway and rapid-transit options are insufficient and their bus routes under-resourced, leaving many to fend for themselves in the sprawling suburb’s transit deserts.

Jennifer Gruden is no stranger to transit deserts. She lives on Morningside Avenue near Lake Ontario in Scarborough and spent close to three hours commuting to and from work each day, before she finally gave in and took a lower-paying job nearby to avoid the stress of scrambling on transit to pick up her children from daycare.

The closest bus stops to her home are about a 10-minute walk away. And that’s for an able-bodied adult, she notes; the walk is harder to manage for her mother-in-law.

After trying a combination of buses and subway routes to get to work, Gruden ended up driving to a nearby GO train or subway station then taking transit, often with at least one transfer along the way. And it still took at least an hour and 20 minutes each way, she says — and that was without any delays.

Getting home to Scarborough after work — and especially to the daycare in time — was “incredibly stressful,” she says.

“I can’t tell you how many times I cried on the way home because I knew I was going to have to pay a fine to my daycare team and have stressed-out kids,” she says.

“I had great difficulty reliably picking them up.”

The problem is simple math, she says. When a neighbourhood lacks access to rapid transit, there aren’t enough hours in the workday to drop the kids at daycare, work a full eight-hour day, then take transit back to the daycare in time to pick them up without fines. She realized she would have to leave work early just to make it in time.

“When I worked downtown, I could not get my son to daycare… and then get on two buses to the subway or one bus to the GO train and then the subway — ie. two TTC fares — and get back, within that window,” she says.

“So I drove him to daycare, then drove back to a GO station a 15-20 minute walk from my home.”

Still, the commute took its toll.

“I could not keep up professionally. I was in digital marketing, and there was no way to deliver results and still get to daycare by 6 p.m. It might have been okay to leave at 5, but leaving at 4:30 or 4:45 was not possible,” she says.

“My husband and I juggled it for many years — his commute is farther — but it wore me and our family down to have every day be a scramble, and be late on the GO, and have to pay late fees to the daycare of $20 per 5 minutes,” she says.

“Ultimately I took a lower-paying job within Scarborough, which may limit my career options going forward,” she says. “It was detrimental to me and my family to be squeezing transit into the day in a way that could not work.”

How many transit deserts does Scarborough have?

Brenda Thompson, from the grassroots organization Scarborough Transit Action, describes transit deserts as neighbourhoods “where the blocks are very long” and the distances far-flung, making it time-consuming to get to work — or even to the grocery store — from home.

“And if you have a transit system that is mostly reliant on buses like in Scarborough, you’ll be travelling longer distances to get to your destination because of the spread-out nature of your neighbourhood,” she says.

She points to neighbourhoods such as east of Kennedy subway station and north of McCowan Station, as well as Kingston-Galloway-Orton Park, Scarborough Village and Malvern as examples of transit deserts. “Those areas have only buses,” she says, and they don’t run very often.

“Any area of Scarborough that is not served by rapid transit is a transit desert,” she suggests.

Even areas where the bus stops are located 500 metres apart can still be considered transit deprived, she says, if the stops are in areas that were designed for cars, not pedestrians — forcing transit riders to cross busy six-lane avenues just to reach their stop.

“And once they get on the bus, it is crowded and gets bogged down in traffic during rush hour, making their commute much longer than someone who lives closer to where the jobs are, or close to a subway station or streetcar line,” she notes.

Data from a 2012 study on transit deserts in the City of Toronto shows a relatively poor level of transit service overall in Scarborough, with several areas in the suburb particularly poorly served.

Researchers at the Martin Prosperity Institute scored neighbourhoods in the City of Toronto on a scale of 0 to 1,500 based on their access to subways, street cars and buses.

The average transit score for the City of Toronto was 66.5. Using the Martin Prosperity Institute’s data, The Discourse found that Scarborough had an average score of 20.97.

None of Scarborough’s neighbourhoods had an average transit score higher than Toronto’s average of 66.5.

The study also identified a correlation between the City of Toronto’s lower-income neighbourhoods and poor transit service.

As the researchers concluded: “Residents of Toronto’s inner suburbs are not simply less advantaged in terms of income changes over time. They also have inferior access to subways and streetcars.” 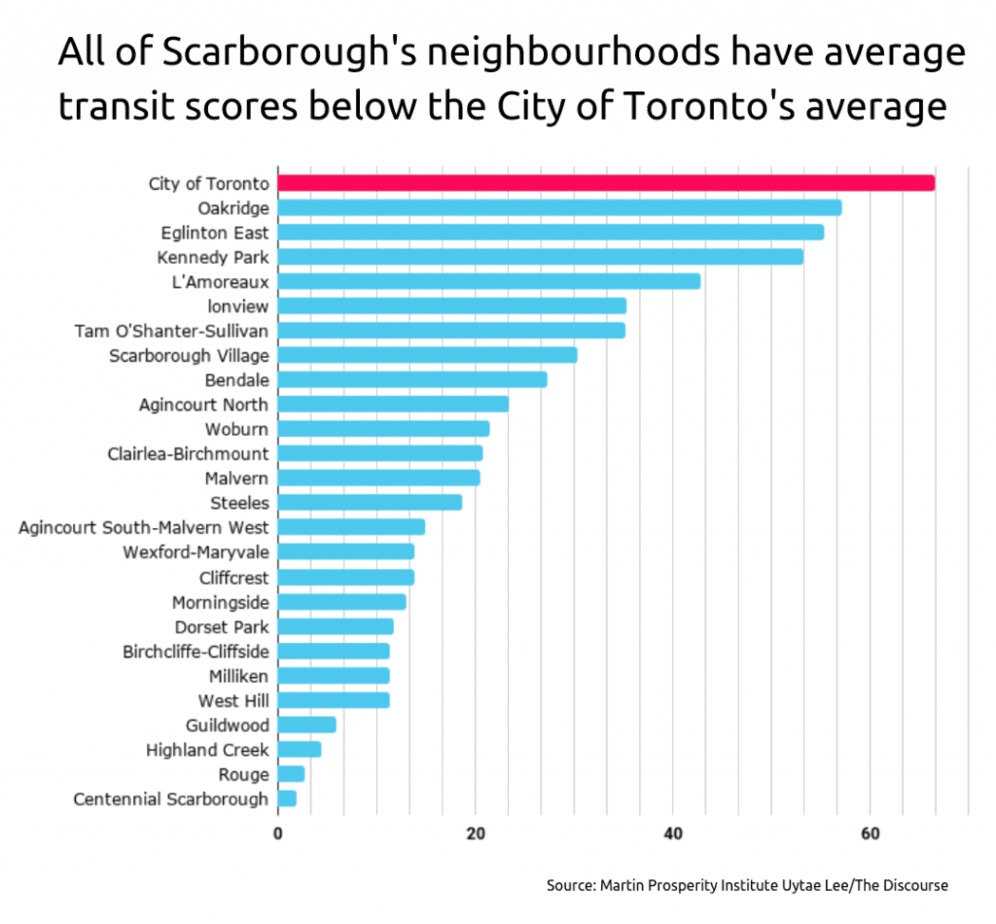 Transit deserts are particularly hard on people who don’t have cars or another option to drive to their destination, Thompson says, adding this disproportionately affects low-income women.

Through her advocacy with Scarborough Transit Action, Thompson says several women have shared their challenges with her. But they’re too exhausted from commuting to advocate for better transit themselves, she says.

“If they’re going to work from Malvern, and they’ve been on a bus for two hours, they just want to go home,” she says, noting some of these women are working two or three jobs.

“This reliance on buses can cause them to lose their job, miss appointments,” she continues, “or they do not apply for jobs that are on the other side of the city because they don’t have a reliable way to get to them on time.”

Jennifer Gruden agrees. Owning a car makes her life in a transit desert easier, she acknowledges, but people living with lower incomes aren’t so fortunate.

“When it takes so long to get downtown or uptown… and families cannot do that and pick their kids up at daycare, they are either going to have serious performance issues in their jobs,” she says, “or have to limit their [job] searches to the eastern end of Toronto.”

“Higher-order transit options like subways and streetcars are concentrated downtown because that’s where the greatest demand is,” he says. “We are constantly reviewing the service we deliver across the city,” he adds, “but we also have to balance that with our available resources.”

Asked if he thinks transit deserts are acceptable, Green says he grew up in Scarborough and is “aware of the wants and needs in the community.”

“The TTC is very much aware of every neighbourhood’s needs for better transportation, including Scarborough,” he continues.

“We put out surveys and allow community members to weigh in on their experience,” he adds. “We take feedback very seriously and try to act accordingly based on our resources.”

And improvements are coming, he says.

According to Green, the TTC is now in the planning stages for the extension of Line 2 from Kennedy Station to Scarborough Town Centre. This comes after the most recent announcement from Ontario Premier Doug Ford in April saying the long-debated three-stop Scarborough subway extension is back on the table. The government says it will once again move forward with plans to extend the line to McCowan and Sheppard.

“All of this will benefit Scarborough residents,” Green says.

“Our service planning staff is also conducting a Scarborough surface-routes study to look at areas for potential improvement,” he adds.

And Scarborough already has three subway stations, he notes, “as well as Line 3, in addition to the many buses operating frequently and on a 24-hour schedule.”

Brenda Thompson is frustrated with what she describes as the political “flip-flopping” of the last decade, as mayors and premiers have proposed then retracted and wrestled with suggestions for subway extensions versus light-rail transit (LRT).

She says the billions of dollars now being spent by the latest Ford administration could be better put towards building an LRT network that “would serve so many more neighbourhoods in Scarborough.”

“I am extremely frustrated with the political interference with transit planning,” she says. “We should be building rapid transit for the most number of transit riders. LRT can do that less expensively.”

Candice Leung would also like to see more resources put into LRT. She is a member of the grassroots organization TTCriders, and also volunteers with  Scarborough Transit Action.

She says the lack of rapid-transit options in Scarborough — coupled with “poorly timed bus service” and bus bunching (when several buses go by in rapid succession between long lulls in service) — creates challenges for many residents who rely on transit to reach their destinations.

Investing in LRT would “bring life to the otherwise car-dominated streets, as well as connect residents of Scarborough with other communities,” she wrote in April in Now Toronto.

Poor transit service affects everyone in the city “because we operate as part of a connected network,” she told The Discourse in May. “If transit service is poor for me, I’m not able to get to work on time and be as productive, so my coworkers feel that impact them.”

So it’s important to talk about transit as a “city-wide system issue,” she continues. Because it’s a city-wide system it’s difficult to identify who is most affected by poor service, she adds. But like in most systems, it’s the more marginalized members of the community who are generally most affected, she says.

“I think a lot about my grandma, who thrives on public transport and how it affects her physical and mental health when she must endure poor transit service,” she says.

To Leung, a transit desert is a neighbourhood where residents lack access to “safe, reliable and fair transportation.” She, too, says Scarborough has transit deserts, and cites the area of Malvern as an example.

She would like to see the financial support and political will to bring better transit service to Scarborough.

“We owe it to every resident in Toronto to get on with building transit and getting shovels in the ground, which in the case of Scarborough, will come as early as next year,” Hadisi told The Discourse via email in April. 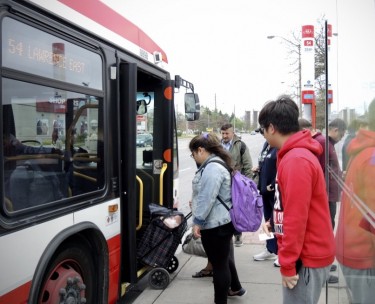 This story is part of our community-driven coverage of Scarborough. It was edited by Robin Perelle and fact-checked by Francesca Fionda. Uytae Lee contributed data analysis, maps and research.