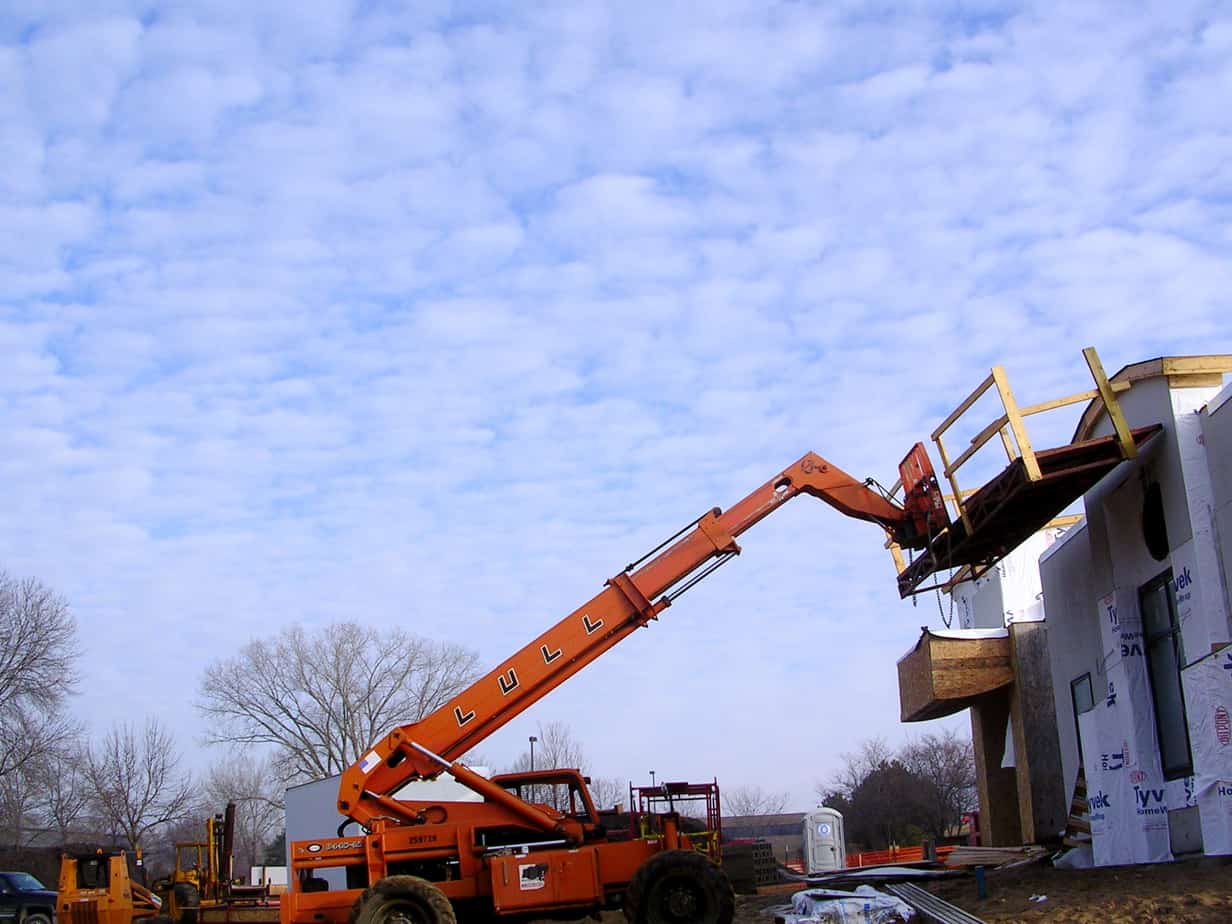 Fact Check: Would affordable housing funds actually be spent on housing in Cowichan?

We take a deeper look at what one community group is saying about the upcoming CVRD referendum.
Jacqueline Ronson
Support this work. Tell a friend.

For the past few weeks The Discourse has been covering the Cowichan Valley’s upcoming referenda on affordable housing and watershed protection. If passed, the Cowichan Valley Regional District will raise property taxes to pay for new programs to address each of these questions. A few days ago we asked people on social media to point us towards any potentially false or misleading information making the rounds on these questions, so we could fact-check them prior to election day on Oct 20, 2018.

While we waited for people to respond, we also completed our own survey of public documents on these questions, including explainers and FAQs from people both in support and opposed to the proposed services. We examined materials from the Cowichan Valley Regional District, the Cowichan Housing Association, One Cowichan, and a community Facebook group that appeared last month called Cowichan Valley Community Issues.

Most of the facts asserted in the documents we checked were generally grounded in verifiable facts. The notable exception was this post on affordable housing by Cowichan Valley Community Issues, which was shared widely on social media but contained several assertions that set off our fact-checking alarms.

It is for this reason that The Discourse decided to carefully fact-check this post specifically. Below, we rate each of the points made by Cowichan Valley Community Issues in its post on affordable housing, and provide an explanation with links for each of our ratings.

According to its Facebook page, “CVCI helps to ensure all Cowichan Valley residents have access to information about their community and their representatives.” The Discourse reached out to the page administrators several times prior to publication to speak with someone from the group. Initially, an administrator responded and said they would do their best to respond to our questions, and asked us to send any statements we found misleading. When The Discourse followed up to specify which assertions we wanted to ask more about and request a brief phone interview to better understand the group’s perspective, we received no response. The Discourse does not know what person or group of people is responsible for the page and its content.

Here’s how we came to each fact-check:

True. This claim is true as checked by the most up to date information from multiple reliable sources.

Mostly true. This claim is for the most part true but still needs some clarification and additional information to understand the big picture.

Misleading. Has some truth to it but could lead the reader to a misleading conclusion if not understood within a greater context. (or potentially misleading).

False. This statement is not true based on the most up to date information from multiple reliable sources.

Impossible to verify. There is no information to check whether is claim is true or false.

Now, here is the full text of the post, with a fact-check below each excerpt: 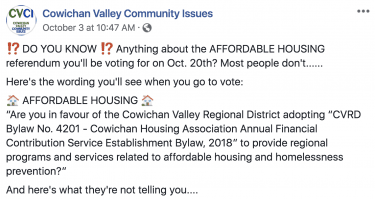 “⁉️ DO YOU KNOW ⁉️ Anything about the AFFORDABLE HOUSING referendum you’ll be voting for on Oct. 20th? Most people don’t……

Here’s the wording you’ll see when you go to vote:

Yes. The preamble of this post accurately represents how the referendum question will be presented on ballots on Oct. 20.

“And here’s what they’re not telling you….

1. IS THE MONEY GOING TOWARDS ACTUALLY BUILDING ANY AFFORDABLE HOUSING?”

Potentially misleading. The phrasing might suggest that no promises have been made with regards to the construction of actual housing, if the referendum passes.

In fact, if passed, the CVRD has promised to put 65 percent of the $765,000 collected annually into a fund reserved for “seed funding for getting bricks and mortar projects underway.”

“2. The Province Government has a $500m Affordable Housing Fund and the program doesn’t require local government funding to participate.”

False. The $500 million affordable housing fund was launched by the B.C. Liberals in 2016. Recently, the B.C. NDP pledged to spend $1.9 billion over 10 years on housing. Typically these funds require local governments or organizations to put up some share of the funding.

BC Housing “absolutely” expects its local partners to maximize their equity contributions to projects, a spokesperson confirmed to The Discourse in an email. “Contributions in the form of land, or other equity (cash, other assets), could strengthen the viability of the development proposal,” wrote Laura Mathews, senior communications specialist.

“3. There is no business plan communicated from the CVRD on what will be achieved with our money, when or how.”

Misleading. While no promises have been made as to which specific affordable housing projects will be built, the CVRD has communicated its plan.

The CVRD details how it hopes the fund will spur affordable housing development in an article on its website and an associated FAQ document. The Cowichan Housing Association, which would manage the fund, offers a more detailed proposal and presentation on its website.

The program is said to be modelled off others that have shown success elsewhere, including the Capital Regional District’s Regional Housing Trust Fund.

“4. Other jurisdictions have produced affordable housing solutions for many years through amenities resulting from housing development projects.”

Mostly true. It is certainly possible to incentivise affordable housing development through the private market, but the CVRD says that hasn’t worked well enough here.

Private development is not meeting the housing needs of people with lower incomes in the Cowichan Valley, the CVRD says. “The need for housing exceeds the ability of the market and the capacity of the not-for-profit sectors to fulfill that need,” it says.

This week the Cowichan Valley Citizen reported that Duncan city councillor Tom Duncan is frustrated with the scarcity of new affordable housing he’s seen in his 10 years on council, despite attempts to entice private developers to help fill the gap. “We’ve changed our bylaws to allow more affordable housing projects, but we’ve been waiting for developers to build them and they are not coming,” he said.

“5. The business model involves CHA (Cowichan Housing Association) as the only CVRD strategic partner to produce affordable housing solutions when CHA confesses no experience or competency to manage construction projects.”

Potentially misleading. The program would allow any organization with a housing proposal to apply to access the funds. Chris Hall, a board member with the Cowichan Housing Association, told The Discourse that the association would establish an allocations committee with representation from different parts of the region to make decisions on which housing proposals would get access to the money. It’s true that CHA doesn’t have experience managing construction projects.

“6. CHA is able to use our $750K for whatever purpose they would like. Will that also make them the owner of any resulting properties? Why would local taxpayers invest in building or acquiring housing assets to be owned by an independent non-profit society? If this is not the plan, then what is the plan? The bylaw is specific to funding CHA and does not allow anyone else to be paid by the CVRD to produce solutions”

False. The CVRD has promised that the Cowichan Housing Association will be accountable for spending the money as intended. The resulting housing projects would likely be owned by whatever organization or government proposed the project, which could be CHA or another entity.

“The CHA would be accountable to the CVRD and the community through approved annual work plans, with requirements for annual reporting of results,” the CVRD says. This FAQ document provides additional details of the commitments the CVRD is making for how the money will be spent.

BC Housing’s model is for the projects it funds to be “designed and built by the private sector and owned and managed by private, non-profit or co-operative housing providers.” Housing providers in the Cowichan Valley would apply through CHA to access the housing trust fund.

“7. Where are the CHA-claimed 7,000 people in the Cowichan Valley that are in need of affordable housing? What is the definition being used for “homeless”? Are taxpayers expected to fund housing for people who cannot afford it because of market conditions? The Cowichan Valley is one of the most affordable areas within 3 hours travel time of the Lower Mainland.”

Mostly true. Cowichan Valley indeed has lower average home prices and rents that many neighbouring jurisdictions, and certainly is cheaper than Metro Vancouver. There’s evidence that, despite this, affordability is a problem for many people here and across much of Vancouver Island and the Lower Mainland.

Benchmark home prices in the Lower Mainland are significantly higher than on Vancouver Island. Within Vancouver Island, Cowichan is less expensive than the Victoria region, the Nanaimo region, Parksville/Qualicum, and the Comox Valley, but more expensive than Port Alberni and Campbell River. The benchmark price of a single family home in Duncan has increased 47 percent in the last three years alone.

The Canadian Rental Housing Index gives the Cowichan Valley a rating of “poor” for the health of it’s rental market. That’s better than neighbouring jurisdictions, but not great from a national viewpoint. The index ranks 250th out of 284 regions in Canada.

According to Statistics Canada’s 2016 Census, 7,745 households in the Cowichan Valley spend 30 per cent, or more, of their income on housing.

“8. The average income in the Cowichan Valley is much lower than in other regional districts near us. Why isn’t affordable housing an economic development need? People need better and higher paying jobs instead of publically funded housing.”

Misleading. Cowichan Valley’s average and median incomes for renter households are lower than the Victoria region, but higher than Nanaimo, Comox Valley, and Alberni-Clayoquot, according to the Canadian Rental Housing Index. Also, while well-paying jobs can be an important part of addressing affordability, there’s evidence that investing in affordable housing spurs economic development too. A 2016 BC Housing report found that every dollar spent on affordable housing generated $2-3 in social and economic benefits.

“9. Affordable housing would typically be needed centrally, near to services that people require. Why is this proposed as a regionally funded service when the need is in Duncan or other centres within the Valley? Are the Area Director’s that support this just doing good for the region or do they believe there is a problem in our area?“

It’s good for affordable housing to be located in walkable neighbourhoods with good public transit. There are commercial centres in the Cowichan Valley that aren’t within municipal boundaries, like Cobble Hill and Mill Bay. It’s also true that none of Cowichan Valley’s communities exist in silos. People travel to commercial centres to go to work and access services. The service workers who serve everyone in the valley need places to live. Seniors in rural areas may move into an affordable apartment in a town when it’s time to downsize and driving becomes more challenging. The CVRD says that it will set priorities with an eye towards making sure there’s access to affordable housing across the region. 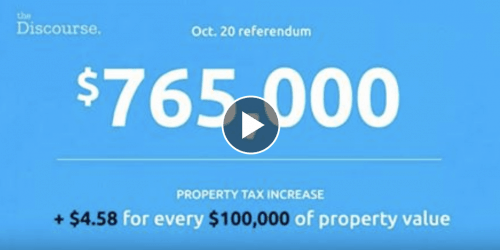 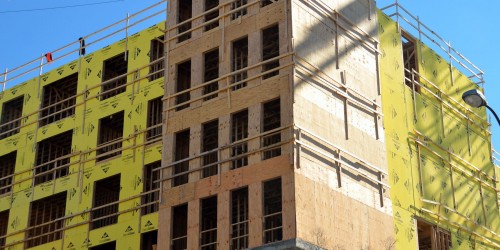 5 things you need to know about Cowichan’s housing referendum