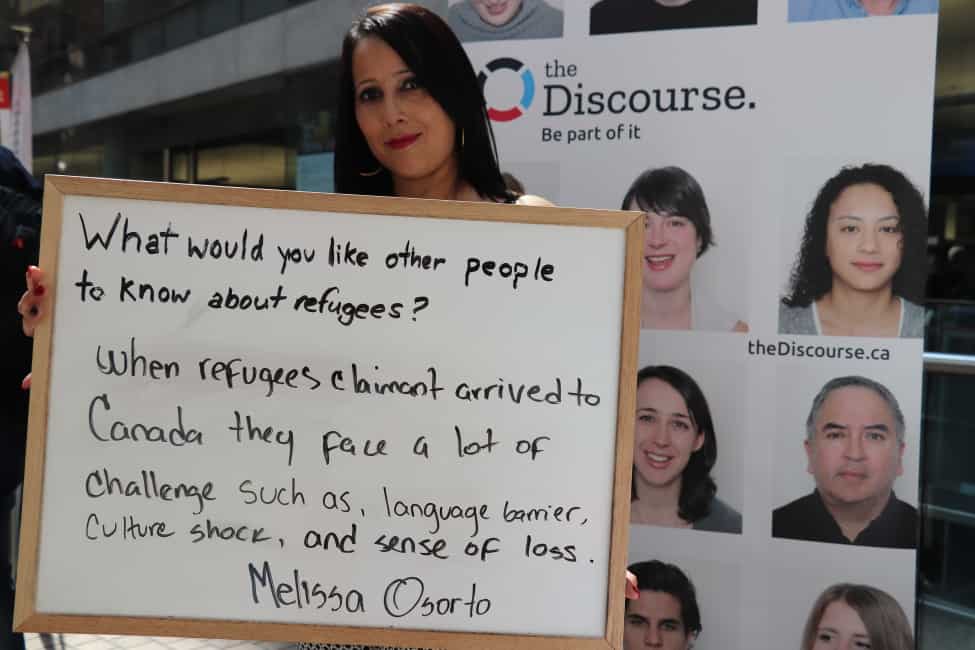 Melissa Osorto, from the settlement organization Options Community Services Society in Surrey, B.C., holds up a board at a World Refugee Day event in Vancouver on challenges refugee claimants face when they come to Canada. Francesca Fionda/The Discourse

Canada may be a global leader on immigrant integration and refugee resettlement, but it struggles to give refugees the health supports they need

Telling thought-provoking stories about social and environmental challenges related to Canada’s progress on the UN’s Sustainable Development Goals, which is like a giant to-do list for making the world a better place.

Sometimes, Tayeba Jalal wakes up in the middle of the night in a sweat. She forgets she is safe in her bed in Vancouver and a sense of danger, lingering from her life in Afghanistan, grabs her. Tension spreads into the pit of her stomach and her back.

“When you have trauma, one of the symptoms is anxiety attack,” says Jalal, who majored in psychology as an undergraduate student in Iran and spent a stint working as a high school psychologist in Kabul. Now, she uses what she learned to analyze herself.

Jalal sought asylum in Canada in 2015, after crossing the U.S.-Canada border on foot. She had fled to the U.S. from her native Afghanistan, where she received death threats because she lived alone and worked as an interpreter for foreign organizations. She felt particularly vulnerable because her family lived in Iran and she was alone in the country. Women are killed by the Taliban for being independent, she explains.

Today, Jalal is grateful to be in Canada, but she says she’s found it difficult to obtain the type of treatment she needs for her mental health concerns. She wishes she knew a psychologist or psychiatrist who spoke Afghan Farsi and understood her culture. Instead, she gets what solace she can by talking through her challenges with friends and studying psychology in her spare time.

Across the country, people like Jalal who come to Canada as refugees often struggle to access mental health supports. Even as Canada plans to welcome 43,000 refugees in 2018, Canadian institutions are struggling to meet refugees’ mental health needs, according to settlement workers, refugees and doctors who spoke to The Discourse.

“The biggest gap in Canada’s resettlement program is on the mental health piece,” says Chris Friesen, director of settlement services at Immigrant Services Society of British Columbia (ISS of B.C.).

Fifteen to 18 per cent of all refugees who come to Canada, or about 4,300 to 5,100 people per year, require a formal mental health clinical intervention to help them address trauma, according to research by ISS of B.C. Friesen says he has been concerned about the issue for three decades and explains that, in the worst cases, refugees in need of treatment for mental health issues end up in the emergency room before they get help.

A lack of resources

Frank Cohn, executive director of the Vancouver Association for Survivors of Torture (VAST), which provides counselling for refugees, also worries about the gap between demand and supply. “We hear from all different groups around [B.C.] that they struggle in meeting the complex mental health needs of clients that they’re working with, whether it’s a school or a mental health clinic or a police unit or whatever,” he says.

At the Canadian Centre for Victims Torture (CCVT) in Toronto, executive director Mulugeta Abai says his staff of 16, which sees about 2,000 new clients per year, struggles with a heavy caseload. “Money is the major challenge,” he says.

In an email to The Discourse, a spokesperson for the ministry says it “funds a number of health and mental health promotion, and well-being activities for newcomers and builds partnerships with stakeholders and organizations in the health sector to identify the best methods for assisting immigrants and families as they settle in Canada.”

Without sufficient federal support, VAST and CCVT scrap together funds from provincial governments and donations, while ISS of B.C. runs a pilot program with philanthropic support to provide refugees with 10 visits with a clinical counsellor.

But provincial healthcare systems “don’t have the cross-cultural capacity and the trauma-informed capacity to be able to serve some of the more complex mental health needs of recent migrants,” Cohn says.

Soma Ganesan, founder of VAST and recently retired head of psychiatry at Vancouver General Hospital, adds that piecemeal funding makes it hard for psychologists and psychiatrists to specialize in treating refugees. “This specialization requires a lot of energy and time,” he says, “and most of the time people do that as a volunteer and they don’t get compensated appropriately at all.”

In a 2018 report on Canada’s resettlement of Yazidi refugees — who suffered intense violence at the hands of Daesh in Syria and Iraq — the Parliamentary Standing Committee on Citizenship and Immigration  urged the federal government to “work with provincial and territorial governments, the Mental Health Commission of Canada and all relevant partners to invest in improving mental health support for all refugees resettled in Canada.”

The lack of resources is complicated by the fact that refugees’ mental health concerns often don’t surface until they have been in Canada for two or more years, according to research by ISS of B.C. By that time, they’ve lost access to the Interim Federal Health Program, which provides extended benefits for refugees, including access to psychologists. The length of time refugees can access the program depends on their immigration category, but the program is typically available to them for their first year in Canada.

Alsaleh came to Canada as a refugee in 2014 after being tortured in Syrian prisons. When he first arrived, he was busy finding a room, learning English, making friends and worrying about his family, he recalls. A year and a half later, depression hit.

He found a way to work through it by sharing his story with the public, including in two TEDx talks, in hopes of sparking greater understanding of the plight of refugees.  “It actually takes years until people settle down, until people just get out of that mentality of being on survival mode, being on flight-or-fight mode,” he says.

Soma Ganesan, who came to Canada as a refugee from Vietnam in 1981 and later founded the Cross-Cultural Clinic at Vancouver General Hospital to provide mental health services to people from diverse cultural backgrounds, says some refugees may also be hesitant to admit to mental health challenges because of stigma. Others end up seeing family doctors or psychiatrists who lack expertise in treating refugees and may not recognize physical symptoms of mental health distress, such as headaches, indigestion and insomnia, Ganesan explains.

“You need to have a staff who specialize in working with population to identify which symptoms have some mental health components,” he says.

“Culturally-responsible service” is a key component of such specialization, Ganesan continues, “because sometimes the same way that we offer to one population may not be sensitive to the other population — depends on where they come from.”

Language is one of the main barriers for access to care, says Branka Agic, who works on immigrant mental health at the Centre for Addiction and Mental Health in Toronto. “Access to qualified interpreters is key,” she says, but the availability of interpreters varies in different parts of Canada with fewer outside of major cities.

“The majority of them — 85 per cent — are fine,” Hynie explains. “They experience the normal distress you would experience after going through a difficult time, but they don’t have mental health issues because of the pre-migration experiences.”

“Issues start to emerge,” she says, “after they have arrived because they experience prolonged exclusion from the workplace, from a reasonable income, separation from family.”

Like many newcomers, refugees struggle to find work that matches their skillset with the key difference being that they haven’t had a chance to plan for their migration, Hynie says. “If you’ve spent four years trying to find a job and you still haven’t found a job that’s commensurate with your training or your education, you’ve squandered how much of your life and how much of your potential? And you will also be losing hope.”

It typically takes 14 or more years for a refugee’s income to equal that of a similarly educated Canadian, according to research from the University of Manitoba. The key factors holding refugees back include language barriers, a lack of Canadian experience and a lack of recognition of foreign educational credentials, says Patrick MacKenzie, chief executive officer of B.C.’s Immigrant Employment Council.

Tayeba Jalal knows such settlement challenges well. She hasn’t seen her family for years and left all of her belongings behind when she fled Afghanistan. She arrived in Canada feeling like “zero,” she says.

Now, she works as an administrative assistant, but dreams of becoming a clinical psychologist so she can help other refugees who have suffered trauma.

Day-by-day, she’s working towards it and building her mental strength, she says. “This dream makes me hopeful to rescue myself.”

This story was edited by Lindsay Sample with fact-checking by Francesca Fionda.

How journalists can do a better job of talking about refugees

Here are tips for refugees being interviewed by the media